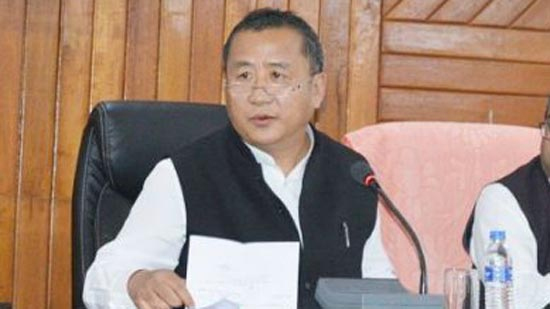 Dimapur, January 25: Nagaland Chief Secretary, Temjen Toy, IAS today called upon voters in the State to become missionaries of change in Nagaland, starting with electoral practices.
Speaking at the 10th National Voters’ Day 2020 on the theme ‘Electoral literacy for stronger democracy’, Toy lamented that Naga people are not electoral literate as voters and called upon all voters to be responsible in electing our leaders.
“Unless we change, the world is not going to change,” he said while calling upon all to be a part of the change as “no awareness campaign can help, unless an individual decide to change”. We can make democracy in our State stronger and effective, he stated.
“We cannot call ourselves electoral illiterate if we do not empower our villagers, youths and women,” he added. Chief Electoral Officer, Nagaland, Abhijit Sinha, IAS, while highlighting the perspective and background about the National Voters’ Day 2020, said the Government of India has decided to celebrate January 25 every year as ‘National Voters’ Day’ and was first celebrated on 25th January 2011, to mark the foundation day of Election Commission of India.
The CEO said the National Voters’ Day is basically to motivate, encourage and convince everyone to be a part of the electoral process, by being enrolled, being aware of it functions and be an informed voter about their candidates, their manifestoes and know that voting is free and fair and should not be influenced by caste, religion, community, etc.
Sinha also appealed all to take the voters’ pledge and rededicated oneself once more honestly for an effective participation in the electoral process to build a stronger democracy.
During the presentation of awards, the Best BLO (State level) was awarded to Yanrenthung Tsanglao while the best Campus Ambassador (State level) was awarded to Vito H. Khulu.
Highlights of the programme included ‘National Voters’ Day’ pledge administered by the Chief Secretary, presentation of Chief Election Commissioner message by Joint CEO, Ruokuovituo Khezhie, skit on the theme by Dreamz Unlimited, cultural song by Cultural Promotion Society, Kohima and song presentation by Virie. (Page News Service)