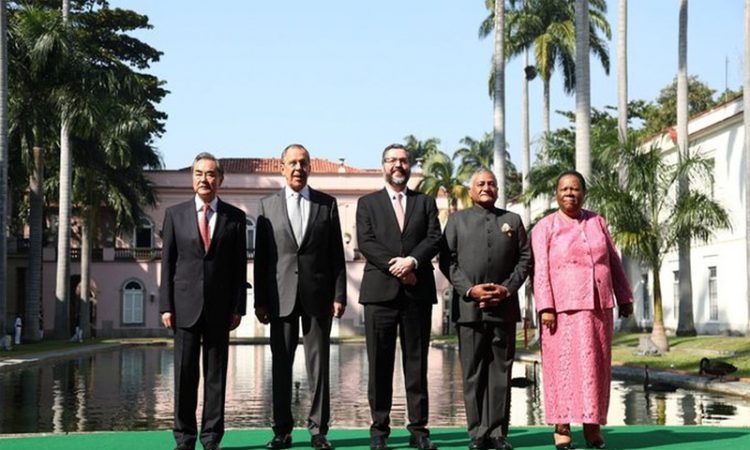 New Delhi, July 27: Deploring recent terror attacks in BRICS countries and other parts of the world, China joined India and other member-nations of the grouping in condemning terrorism in all its forms and manifestations and recognised terror acts as criminal and unjustifiable which should not be associated with any religion, nationality, ethnic group or civilisation.
Foreign ministers of the five BRICS states (Brazil, Russia, India, China and South Africa) concluded their one-day meeting late on Saturday night in the Brazilian capital of Rio de Janeiro, adopting a joint statement which also called for concerted efforts by all states to fight terrorism under UN auspices on a firm legal basis.
India was represented at the meeting by Minister of State for Road Transport and Highways Gen VK Singh (Retd) since External Affairs Minister S Jaishankar cancelled his visit at the last minute in view of the extension of the ongoing Parliament session. China was represented by its Foreign Minister Wang Yi.
In his address, the Indian minister sought the support of BRICS on the issue of Prime Ministers Narendra Modi’s call for a global conference on terrorism. He also observed that the discussions on UNSC reforms could not be an exercise in perpetuity while the credibility and legitimacy of the Security Council continued to get eroded.
The ministers expressed their conviction that a comprehensive approach was necessary to ensure effective results against terrorism, which should include countering radicalisation, recruitment, travel of foreign terrorist fighters, blocking sources and channels of terrorist financing, including through organised crime by means of money-laundering and supply of weapons.
They recalled the responsibility of all states to prevent the financing of terrorist networks and terrorist actions from their territories. They also called for an expedited adoption of the Comprehensive Convention on International Terrorism in the UN General Assembly. They emphasised the importance of preventing and combating the financing of terrorism and welcomed the adoption of UNSC Resolution 2462 (2019).
The BRICS ministers also reaffirmed their commitment to support international cooperation in combating illicit financial flows from all types of criminal activity, including within the Financial Action Task Force (FATF) and the World Customs Organisation. In this regard, they underscored the importance of improving mutual exchanges and data sharing.
The ministers reaffirmed their commitment to strengthen the legal framework related to the resolution of cases of corruption, in accordance with the UN Convention against Corruption and other multilateral principles and norms.
They reaffirmed the need for a comprehensive reform of the UN, including its Security Council, with a view to making it more representative, effective, and efficient, and to increase the representation of the developing countries so that it could adequately respond to global challenges. China and Russia reiterated the importance they attach to the status and role of Brazil, India and South Africa in international affairs and support their aspiration to play a greater role in the UN.
The ministers reiterated support for international and national efforts to achieve an “Afghan-led, Afghan-owned” peace and reconciliation process and to build a peaceful, secure, united, stable, prosperous and inclusive country that existed in harmony with its neighbours.
They expressed concern over the heightened tensions in the Gulf region and called for a peaceful political solution through dialogue and diplomatic engagement. (Courtesy: TS)