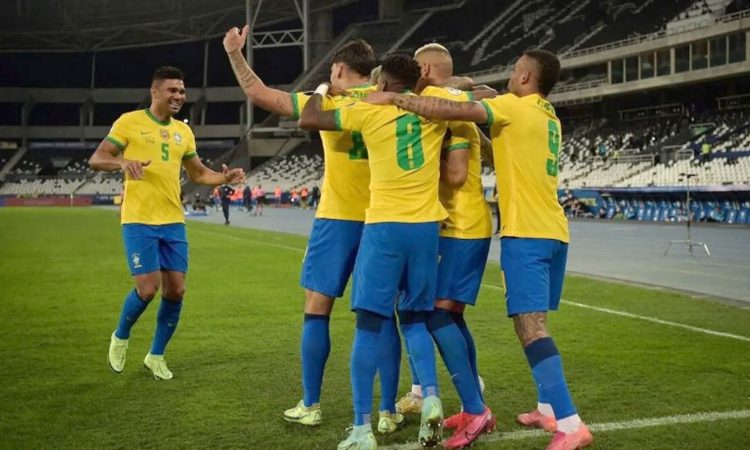 RIO DE JANEIRO, July 3: Brazil survived losing Gabriel Jesus to a red card early in the second half to defeat Chile 1-0 in a thrilling Copa America tie on Friday and move into a semi-final next week against Peru.

The host nation will play Peru, who beat Paraguay on penalties earlier in the day, at Rio de Janeiro’s Nilton Santos stadium on July 5.
The other quarter-finals will be played on Saturday, with Argentina playing Ecuador and Uruguay facing Colombia.
Friday’s tie between the last two Copa America champions was more closely fought than their form coming into the game suggested.
Brazil were unbeaten in 11 games and topped Group B, while Chile finished only fourth in Group A and have drawn four of their last six matches 1-1.
After an even and goalless first 45 minutes, the match sparked into life within seconds of the restart, when substitute Lucas Paqueta worked a scrappy one-two with Neymar and then held off Gary Medel to fire home from close range.
However, the outlook changed less than two minutes later. Brazil were reduced to 10 men after Gabriel Jesus was shown a straight red for a horrific kung-fu kick that sent Eugenio Mena tumbling.
Brazil are unused to being under pressure, especially at home, but Chile forced them onto the back foot for large parts of the second half as they poured forward in search of an equaliser.
Ben Brereton, the English-born striker who replaced Alexis Sanchez at half-time, hit the bar with a looping header and Ederson made at least two good saves.
But the Chileans, winners in 2015 and 2016, could not get the goal and crashed out.
“We were beaten by the favourites, the team playing at home,” said Chilean midfielder Arturo Vidal. “At least we will leave with our heads held high.”
Peru move into Copa America semi-final with penalties win over Paraguay

Peru moved into the semi-finals of the Copa America in dramatic fashion on Friday by beating Paraguay 4-3 on penalties after the two sides drew 3-3 over 90 minutes in an action-packed encounter in Goiania.
David Martinez, Braian Samudio, and Alberto Espinola all missed in the shoot-out for Paraguay, but Miguel Trauco guaranteed Peru a spot in the semi-finals for the second Copa in a row after Santiago Ormeno and Christian Cueva had their kicks saved.
The result means Peru will play the winner of Friday’s late game between Chile and hosts and reigning champions Brazil.
The other quarter-finals will be played on Saturday and feature Argentina against Ecuador and Uruguay versus Colombia.
Peru hadn’t lost to Paraguay since 2014, a run that stretched back for seven games. But they went behind after just 11 minutes when Gustavo Gomez was on hand to push a parried save from Pedro Gallese into the net from close range.
Peru fought back quickly with Andre Carrillo, who was superb on the flanks, instrumental in creating two chances that Gianluca Lapadula put away with aplomb.
Lapadula, the Italian-Peruvian who plays for Benevento in Italy, had scored just once in his first eight games for Peru but he doubled that tally by half time.
The first came in 21 minutes when he turned in a Carrillo cross from the left and the second came five minutes before half time when he ran on to a through-pass to slip the ball under an advancing Antony Silva.
A game that would feature 32 fouls and six yellow cards saw its first red just seconds before half-time when Paraguayan captain Gomez was shown a second yellow minutes after getting a first for dissent.
That left Paraguay facing a full 45 minutes against 10 men, but it was they who started strongest in the second half and they equalised after 54 minutes when Junior Alonso seized on a loose ball from a corner kick and lifted it into the roof of the net.
Peru regained a barely deserved lead 10 minutes from time when Yoshimar Yotun’s long-range shot was cruelly deflected past Silva but they were also reduced to 10 men five minutes later when Carrillo capped an eventful display by getting a second yellow.

Gabriel Avalos then prompted ecstatic scenes for the Paraguayans when he drew things level with his first international goal in the final minute of the match. (Reuters/AFP)