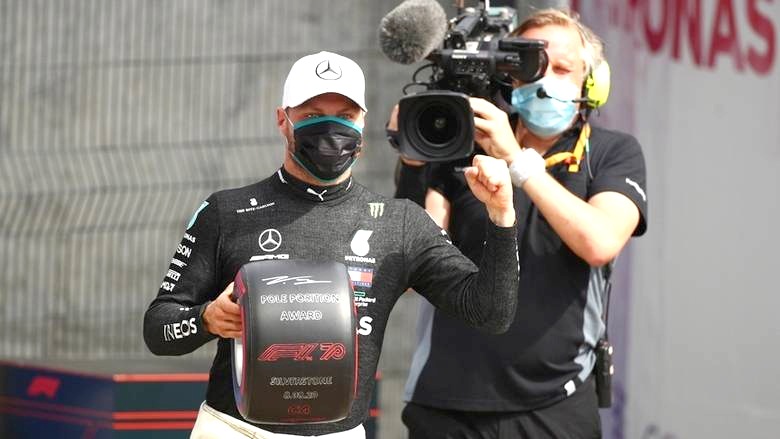 SILVERSTONE (United Kingdom), August 8: Valtteri Bottas outpaced his Mercedes team-mate and world championship leader Lewis Hamilton by the finest of margins on Saturday to claim a dramatic pole position for the 70th Anniversary Grand Prix.
The Finn clocked a fastest lap in one minute and 25.154 seconds to beat the six-time world champion by only 0.063 in the final seconds of an enthralling qualifying session.
It was the Mercedes team’s 67th front row lockout.
“It feels good,” said Bottas who was securing the 13th pole of his career 48 hours after signing a new contract to keep him at Mercedes next season.
He added: “We have improved the set-up and the car since last week. Mentally, when you start on pole, you can only aim to win the race – and the starting point is good! It is so nice to drive this amazing car.”
Hamilton explained his unexpected ‘slip’ to second.
“I wasn’t that great, but Valtteri did a great job and he deserves pole.”
Nico Hulkenberg, standing in for coronavirus victim Sergio Perez with the Racing Point team, was third, securing his spot with an impressive performance only 10 days after receiving a late call-up while eating a pastry in a Cologne café.
“It’s been crazy last week,” he said.
“Q2 was tricky and I made life hard for myself – and it is definitely going to hurt tomorrow, not having had the experience last week.”
He failed to start last Sunday’s British Grand Prix at the circuit after an engine problem.
Max Verstappen took fourth for Red Bull ahead of Daniel Ricciardo of Renault, Lance Stroll in the second Force India, Pierre Gasly of Alpha Tauri and down in eighth Charles Leclerc in the leading Ferrari.
Alex Albon was ninth in the second Red Bull and Lando Norris 10th for McLaren. (AFP)