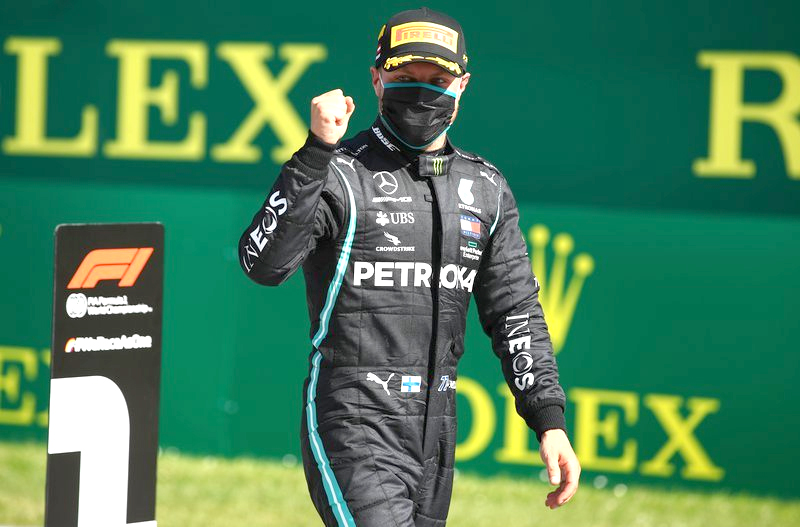 SOCHI, September 25: Valtteri Bottas continued his habit of being fastest on Friday when he topped the times for Mercedes in both opening practice sessions at the Russian Grand Prix.
The Finn clocked a best lap in one minute and 33.159 seconds around the Olympic Park circuit to outpace his team-mate and runaway championship leader Lewis Hamilton by two-tenths of a second in the second session.
The two Mercedes men were more than a second clear of third-placed Daniel Ricciardo of Renault despite enduring a difficult day of off-track excursions on the slippery track.
Bottas, who is 55 points adrift of the six-time champion in this year’s title race, knows he has to take advantage of his opportunity at one of his favourite circuits to keep his challenge alive – while Hamilton is bidding to equal Michael Schumacher’s record of 91 Grand Prix wins.
It was the sixth Friday in a row that had seen Bottas topping the times – and at a track where he claimed his maiden win in 2017 and where Mercedes are unbeaten, having won all six events since the inaugural race in 2014.
Hamilton has won four times and former team-mate Nico Rosberg won in 2016 on his way to claiming the title.
In front of a meagre scattering of fans to witness practice, with 30,000 due to attend Sunday’s race, Carlos Sainz was fourth ahead of his McLaren teammate Lando Norris and Sergio Perez of Racing Point.
The Russian race will be the first major sports event to be run in front of a significant crowd in the Covid-19 era.
Max Verstappen was down in seventh for Red Bull ahead of Charles Leclerc in the leading Ferrari, Esteban Ocon of Renault and four-time champion Sebastian Vettel in the second Ferrari.
Bottas had earlier topped the times in opening practice for the sixth time in a row while Hamilton, having damaged his tyres, was only 19th.
The second session was run in warm late summer sunshine with an air temperature of 28 degrees at the Black Sea resort city as Romain Grosjean led the way in his Haas.
Norris soon went fastest for McLaren before the Finn took over with 1:36.065 on his hard compounds before Hamilton took command – the defending champion going 1.1 seconds quicker in 1:34.890 on mediums.
As the field switched to soft compound runs, Mercedes continued to set the pace, Hamilton improving to 1:33.786, one-tenth ahead of Bottas, before the Briton locked up heavily under braking at Turn 13.
It was clearly not an easy day for anyone on the smooth and slippery surface, but Bottas avoided a similar fate and trimmed his time to 1:33.519 and go top by two-tenths.
These difficulties continued to challenge the leading drivers with Verstappen spinning twice and Hamilton, again, going off-track at Turn 13 where he was followed by Bottas, who locked up, but recovered. (AFP)