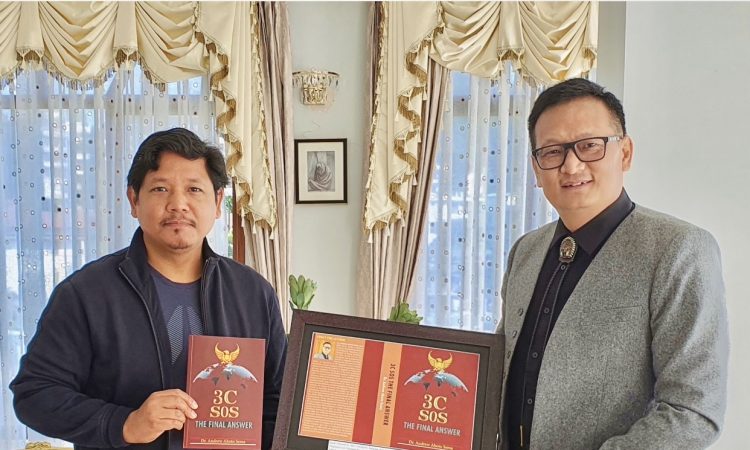 Dimapur, November 17: A book entitled ‘3C SOS – The Final Answer’ authored by Dr. Andrew Ahoto Sema was released by Conrad K. Sangma, Chief Minister of Meghalaya and National President, National People’s Party (NPP) during a Book Release Event on November 140 at Shillong. The event holds a very special significance, as this year the Children’s Day, Sumi Ahuna Festival and Diwali were all being celebrated on the same auspicious day of November 14.
Speaking on the occasion of the book release, Conrad K Sangma expressed his utter happiness and satisfaction that such a book on education was perfectly timed with the transition of education system from the traditional to the modern, especially in the context of the State of Meghalaya.
According to him, Meghalaya was already planning to overhaul its education system in the same model as enshrined in Dr. Ahoto’s book whereby there will be a paradigm shift from rote learning and bookish education to skill and value based education.
He also highlighted how a revolution in the Indian education system with a drastic change in curriculum can help in the development of the youths and in the absence of such a modern curriculum, the future of our society is bleak and would be destroyed from the core.
He also expressed the intention of the Meghalaya Government in making the state a model state in educational reforms for which Dr. Ahoto’s book could help profoundly as an important guiding factor.
‘3C SOS – The Final Answer’ is a Non-Fiction Illustrative and Informative Book which is in its final stage of publication and will hit the stands on 1st December 2020 coinciding with the Nagaland Statehood Day.
Meanwhile, Dr. Andrew Ahoto Sema has expressed his heartiest gratitude to all the people behind the successful completion and release of the book including the publishers of the book, his family, friends and well-wishers who had constantly guided and motivated him throughout the writing, editing and publication of the book. (Page News Service)