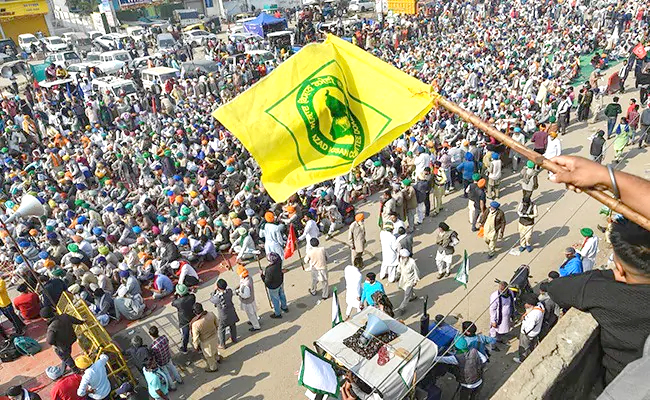 New Delhi, December 4: The farmers protesting on the outskirts of Delhi against the centre’s new agricultural laws have called a nationwide shutdown on Tuesday, saying they will block all roads to the capital, amid a stand-off with the government.

The farmers said they will also occupy all highway toll gates across the country and not allow the government to collect tolls as part of the December 8 strike. “More people will join our movement,” Harinder Singh Lakhowal, a leader of one of the protesting groups, told a news conference.
The farmer groups said that in their talks with the government they have asked for the withdrawal of the three laws that they say will leave them at the mercy of large corporations and override safeguards against being cheated.
Announcing the escalation of their protest, the farmers, who faced a brutal police crackdown in Haryana last week before being allowed to hold a peaceful demonstration on the outer fringes of Delhi, said they will take to burning effigies on Saturday.
“We see the government agreeing to our demands on Minimum Support Price, electricity and penalties for stubble burning but we won’t stop till the laws are repealed,” Satnam Singh Ajnala, President of the Jamhoori Kisan Sabha, Punjab, told NDTV.
Earlier on Thursday, the fourth round of talks between the government and around 40 farmers’ unions failed to make headway, but a cabinet minister said they would continue discussions on Saturday.
In the country’s biggest farm unrest in years, tens of thousands of growers are protesting on the outskirts of Delhi against the laws seeking to rid the sector of antiquated procurement procedures and allow farmers to sell to institutional buyers and big international retailers.
The farmers, who form a powerful political constituency, fear the laws passed in September could see the government stop buying grains at guaranteed prices, leaving them at the mercy of private buyers.
Agriculture and Farmers Welfare Minister Narendra Singh Tomar said Thursday’s talks, which lasted seven hours, were cordial and the government was sympathetic.
“We addressed the issues raised by them and we are going to meet again on the 5th,” Mr Tomar told reporters.
He added the government would continue the guaranteed price system, but farm leaders have previously sought a written assurance.
“The government did propose amendments to the laws but farmers unions still insisted on taking these laws back,” said Kavitha Kuruganti, a leader of the farmers’ group All India Kisan Sangarsh Coordination Committee.
Prime Minister Narendra Modi’s government has defended the new laws and said they only give an option to farmers to sell to private buyers.
‘Not scared of ED or anyone’: Punjab CM slams opposition for ‘playing politics’ over farmers’ protest
Asserting that he was not scared of the Enforcement Directorate (ED) or anyone else, Punjab chief minister Captain Amarinder Singh on Friday slammed all the opposition parties in the state for “playing politics” with the lives of the farmers to further their “own interests”.
This comes amid Shiromani Akali Dal (SAD) leaders and Aam Aadmi Party (AAP) leaders targetted Punjab Chief Minister over the ongoing farmers’ protest against three farm laws.
Singh, lambasting all the key opposition players, right from Shiromani Akali Dal (SAD) leaders Prakash Singh Badal, Sukhbir and Harsimrat, to Delhi chief minister Arvind Kejriwal and Haryana Chief Minister Manohar Lal Khattar for their “flip-flops and for making a mockery of the fight of the farmers, who were sitting out in the cold on the roads to get their rightful due.”
“For 13 years, I have been going to courts because of the cases initiated against me by the Badals, I am not bothered about the ED. I can go to courts and fight for another 13 years,” Singh said as per Chief Minister’s Office (CMO) release.
The chief minister’s response comes after former union minister Harsimrat Badal alleged that he was under ED pressure. “All these Badals are alike, and they are all liars. Akali leaders should stop lying and tell the truth as the people know what you are,” he said.
The Punjab chief minister met Union home minister Amit Shah and urged the Centre to rethink its stand on the legislations while appealing to the farmers to find an early solution to the problem that was adversely impacting the “economy of the state and also posing a serious danger to national security”.
Commenting upon his meeting with Union home minister Amit Shah in the national capital on Thursday, chief minister said, “I had told Union home minister Amit Shah that the amendment Bills passed in Punjab Vidhan Sabha were the solution to breaking the deadlock over the farmers’ issue as they were the essence of the state’s future. I urged him to get the Bills approved by the President.”
While reacting to former Punjab Chief Minister Parkash Singh Badal’s decision to return the Padma Bhushan medal to the Government of India, Singh in a live video statement on Facebook said, “I do not know why Prakash Singh Badal got the Padma Bhushan in the first place.”
Noting that Gen Harbaksh Singh had got Padma Vibhushan for winning the 1965 war, Captain Amarinder asked “what war did Parkash Singh Badal fight or what sacrifice did he make for the community. Stop politicking on this…these theatrics might have worked 40 years ago but they won’t work now.”
“All his life Prakash Singh Badal has been claiming that he represents the interests of the farmers. Then why did his party support the central Ordinances after initially opposing them, and then did an about-turn and started publicly criticising the legislations?” remarked the Chief Minister.

Captain Amarinder pointed out that as a member of the Union Cabinet, Harsimrat Kaur Badal had been very much a part of the meeting that passed the farm ordinances.
He alleged that Kejriwal has twisted his statement on national security. “It was clearly made in reference to Pakistan and as home minister of Punjab, it was his duty to apprise the Union Home Minister of the dangers of the prolonged agitation.”
“Kejriwal nu jhooth bolan di aadat hai, aur Khattar nu kuttan di,” (Kejriwal is in the habit of lying and ML Khattar is in the habit of thrashing), said the Chief Minister, taking on both, his Haryana and Delhi counterparts on their actions amid the farmers’ protests.
He alleged that old farmers were not spared by the Khattar government in Haryana.
(ndtv With inputs from agencies/ANI)