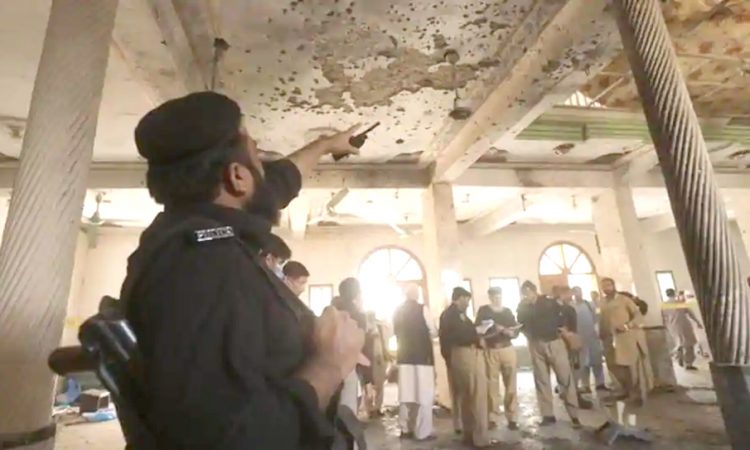 A police officer points to the damaged roof while others survey the site of a bomb blast at a religious seminary in Peshawar, Pakistan on October 27. (Reuters)

Islamabad, October 27: A bomb blast at a religious seminary in the Pakistani city of Peshawar on Tuesday killed at least seven people and wounded more than 80 others, many of them critically, police and eyewitnesses said.
The explosive device in a bag detonated inside the madrassa in Dir Colony in the morning as students were entering the premises.
Most of the victims appear to be young men between the ages of 22 and 28 who were already within the building and possibly attending a class at the seminary when the device exploded.
Witnesses said they saw an unidentified man leave a bag in the school premises and leave almost immediately. Police said they are trying to retrieve the footage of this person so that they can identify him.
A video shared by police showed the madrassa’s religious scholar Sheikh Rahimullah addressing students, citing religious texts on the importance of education when a huge blast ripped through the hall, knocking over the camera.
Police said the explosive device was believed to have exceeded five kilogrammes.
Police fear the number of casualties may increase because some of those injured are in a serious condition. Most of the victims were taken to Peshawar’s Lady Reading Hospital. Most of suffered burn injuries.
Most students in the premises at the time of the blast were hurt in the blast, many of them critically, said police. The total strength of the Madrassa is believed to be over 1,000 but at the time of the explosion, many had not entered the building.
It is believed that the students of the junior classes had not come to the school at the time of the explosion as their classes started later.
The attack comes after a period of respite in Peshawar where such incidents had reduced significantly over the past two years. Peshawar police administration has said that the attack is being treated as an incident of terrorism and it could have been done at the behest of some other country so as to create panic and terror in the city.
There was no immediate claim of responsibility for the bomb in the northwestern city, near the border with Afghanistan, which has long been plagued by Islamist violence.
There has been an increase in attacks on the security forces this year in Khyber Pakhtunkhwa province, of which Peshawar is capital.
Some of the past attacks have been claimed by the Pakistani Taliban. However, the militant group released a statement saying they condemned Tuesday’s blast and denied involvement.
Prime Minister Imran Khan on Twitter sent his condolences to family members of the victims and the injured. “I want to assure my nation we will ensure the terrorists responsible for this cowardly barbaric attack are brought to justice ASAP,” he said.
(HT With inputs from Agencies)