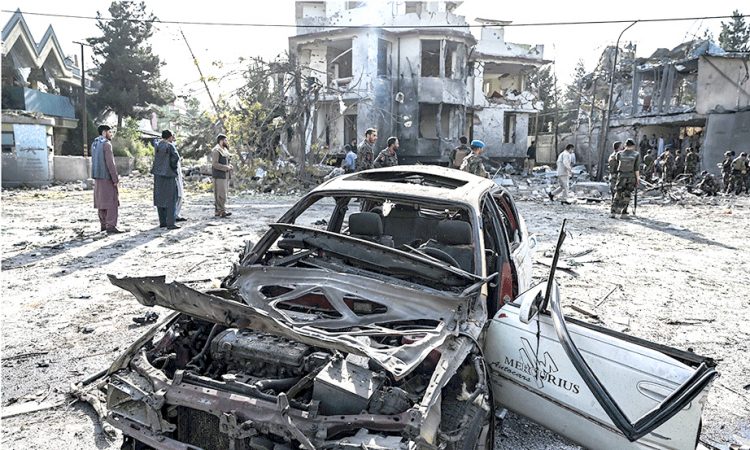 Afghan security personnel inspect the site a day after a car bomb explosion near the wreckage, in Kabul on August 4, 2021 AFP

KABUL, August 4: A blast near the office of Afghanistan’s main security agency wounded three people on Wednesday hours after a bomb and gun attack on a minister’s compound brought surging Taliban violence to the capital.

The Taliban claimed responsibility for the late Tuesday car bomb and gun attack on the home of acting Defence Minister Bismillah Mohammadi. The was no immediate claim for the Wednesday blast.
Mohammadi survived the attack on his compound in a heavily fortified part of Kabul but the violence was a stark illustration of the deterioration in security as U.S.-led foreign forces complete their withdrawal and the insurgents seize swathes of territory.]
Taliban spokesperson Zabihullah Mujahid said his group targeted the minister’s residence as an important meeting was underway there.
Government forces battled the attackers for more than four hours and Ministry of Interior said at least eight civilians were killed and 20 wounded.
The explosion on Wednesday near a facility of the National Directorate of Security wounded two civilians and a security official, police said.
The Taliban have stepped up their campaign to defeat the U.S.-backed government since April as foreign forces complete their withdrawal after 20 years of war.
Fighting has been particularly heavy around the city of Herat, near the western border with Iran, and Lashkar Gah and Kandahar in the south.
An Afghan military spokesman said an emergency had been declared in Lashkar Gah and government forces were getting reinforcements and U.S. air support.
“Special forces have been sent to the area. They are in good morale,” armed forces spokesman General Ajmal Omar Shinwari told Reuters.
The loss of Lashkar Gah would be a huge blow for the government, which has pledged to defend strategic centres after losing many rural districts to the Taliban in recent months.
Scores of families have fled from their homes in the small city, capital of Helmand province, as government forces launched a counterattack against the Taliban.
The United Nations reported on Tuesday that at least 40 civilians had been killed in Lashkar Gah in the previous 24 hours.

Taliban fighters had taken control of some radio and TV stations in the city and were moving into homes to stop people from helping government forces, residents said. (Agencies)