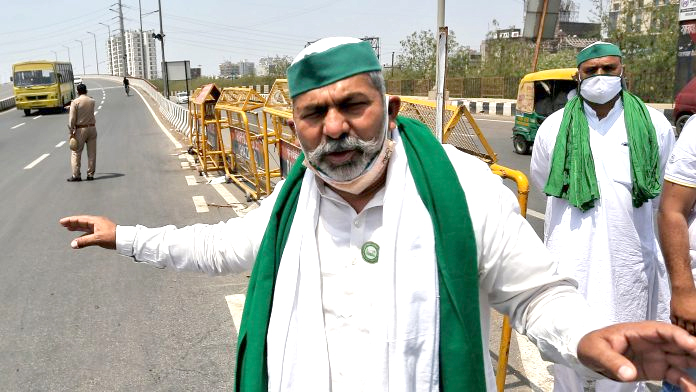 Ambala (Hry), May 2: The Haryana Police has registered a case against Bharatiya Kisan Union leader Rakesh Tikait and 12 others, who held a ‘maha panchayat’ in a village here, for allegedly violating prohibitory orders under Section 144 of the CrPc, officials said on Sunday.

Tikait and some other BKU leaders addressed the ‘kisan mazdoor maha panchayat’ in Dhurali village near Ambala Cantt on Saturday.
Ratan Maan Singh, Baldev Singh and Jasmer Saini are among the other 12 farmer leaders who have been booked by the police.
In view of a massive surge in coronavirus cases, the district magistrate had imposed Section 144, which bars assembly of four or more persons.
The police said Assistant Sub-Inspector Chandi Singh had warned the BKU leaders not to hold the ‘maha panchayat’ as Section 144 was enforced in the district.
“However, BKU leaders went ahead and organised the event, a senior police official said.
Based on a complaint of the assistant sub-inspector, a case was registered against Tikait and 12 other farmer leaders.
“They violated the orders under Section 144 as well as the orders duly promulgated by the public servant (district magistrate) under Section 188 of the IPC. The other provisions of IPC added in the FIR include Section 269 (negligent act likely to spread infection of disease dangerous to life) and 270 (malignant act likely to spread infection of disease dangerous to life), the police official said.
Addressing the ‘maha panchayat’, Tikait, who is the national spokesperson of BKU, reiterated that the agitation against the Centre’s new farm laws will continue till the time these legislations are repealed.
He asked the farmers to prepare themselves for a long battle.
The BKU leader also hit out at the government over its handling of the COVID crisis, saying various hospitals across the country are grappling with a severe shortage of medical oxygen.

Talking to the media later, Tikait said during the event, farmers were told that they should take all the steps to protect themselves from the disease.(PTI)