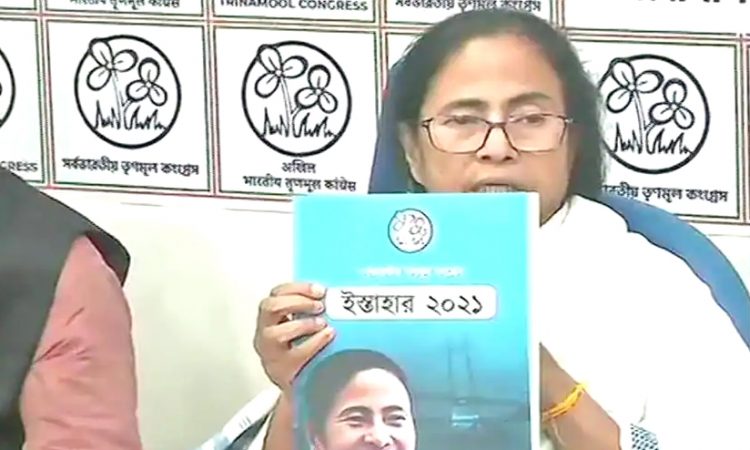 Gopiballavpur/ Lalgarh (WB), March 17: Chief Minister Mamata Banerjee on Wednesday accused the BJP of plotting the “attack” on her in Nandigram to force her indoors ahead of the assembly elections in West Bengal.

Addressing back-to-back election rallies in Gopiballavpur and Lalgarh in the Jhargram district, Banerjee alleged that earlier it was CPI(M) which used to physically attack her, and now the BJP was doing the same.
“They (BJP) wanted to keep me indoors so that I cannot go out during the elections. They have injured my leg,” Banerjee said, addressing the election rallies sitting on a wheelchair.
The chief minister had suffered an injury to her left leg at Nandigram on March 10 during a crowd surge as she greeted people from her vehicle with its door open, at a market area.
“They cannot throttle my voice, we will defeat BJP,” she said, while urging the people of the region to vote for the TMC candidates.
Banerjee claimed that though the BJP won the Jhargram Lok Sabha seat in 2019, the party MP did nothing for the area.
She mentioned the schemes launched by her government over the years, reaffirming that if voted to power she will ensure free doorstep delivery of ration.
Jhargram district, in the Junglemahal area in the western part of the state, witnessed a BJP wave in 2019 with the party winning four Lok Sabha seats in the region.
Lalgarh, once synonymous to Maoist insurgency, has witnessed rapid development over the last ten years, she said.
Banerjee’s rallies in both the areas saw significant attendance with a sizeable number of women supporters.
“I have been injured in my leg recently, earlier my head was fractured, my hands were broken, I had an operation in my stomach… I have been attacked all my life,” she said.
“Earlier, CPI(M) used to physically attack me, now BJP does the same,” Banerjee alleged, claiming that the “harmads” (goons) of Left have now become “ustads” (ruffians) of BJP.
The Trinamool Congress chief said that from her party some “traitors who love money” also joined the BJP.
“Vote for Trinamool if you want me. I can form the government if my candidates win, else I will not be able to do so,” she said.
Banerjee accused the BJP of spreading money to bring people to its meetings and rallies, and vote for its candidates in the assembly elections.
The chief minister alleged that though she wants to vaccinate the people of the state against COVID-19 free of cost, the Centre was not allowing her.
The BJP promised ahead of the Bihar elections that it will vaccinate all people of the state for free, but it did not keep the promise, she said.
“BJP says we all are thieves and it is a saint, but the most corrupt party in the country is BJP,” she said.
Banerjee alleged that law and order in BJP-ruled Uttar Pradesh, whose Chief Minister Yogi Adityanath has addressed some election rallies in Bengal, is in an abysmal state with atrocities against women being perpetrated.
“They (BJP) have brought a thousand ministers and leaders for the elections in the state,” she said, alleging that the BJP is planning to bring hooligans to the state by trains on election days.

Raising the popular ‘khela hobey’ (game on) slogan, Banerjee asked the people of Jhargram, which will go to the polls in the first phase on March 27, to play in such a way that the ball goes out of the ground.
“Today, I have come in pain but after winning, I will come again, walking on two legs,” she said.
Banerjee also urged the Left supporters to vote in favour of the TMC in the battle against BJP, and not to “waste” by giving those to the alliance candidates.
The Left Front, the Congress and the newly-formed ISF have formed an alliance to fight the eight-phase elections in West Bengal together. (PTI)