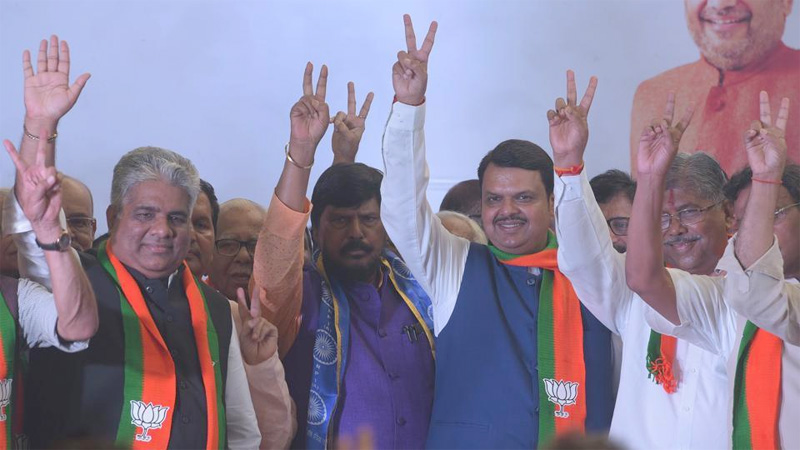 Mumbai/Chandigarh, October 24: The BJP-Shiv Sena alliance on Thursday retained power in Maharashtra, albeit with a reduced majority, while it was a hung Assembly in Haryana where the BJP emerged as the single largest party and JJP chief Dushyant Chautala and independents hold the key to government formation.
As the NCP led by the wily Sharad Pawar, 78, fared better than expected for the opposition in Maharashtra, the Sena is expected to drive a hard bargain with the BJP, which was expecting a emphatic victory. The Sena insisted on a “50:50” power sharing formula for the two coalition partners.
In the first Assembly elections after the BJP’s triumph in the Lok Sabha polls in May, the saffron party’s electoral juggernaut met with some resistance in Maharashtra and Haryana with a resurgent Congress putting up a good showing in the northern state.
Though the BJP, which bagged 40 of the 90 seats at stake in Haryana and was six short of majority to retain power, its chief Amit Shah indicated the party will stake claim to form the next government. The half-way mark is 46. The BJP had 47 seats in the outgoing house and won all the 10 seats in the Lok Sabha polls.
All eyes were on the fledgling Jannayak Janta Party(JJP) which was floated last year by Dushyant Chautala, a former MP from Hisar, after a vertical split in the once powerful INLD following a family feud in the Chautala clan. The JJP bagged 10 while Independents had 7 in their kitty. Chautala remained non-committal on whether his party would support the BJP or the Congress in forming a government.
The Congress bagged 31 seats, up from 15 in the outgoing House.
Senior Congress leader and former chief minister Bhupinder Singh Hooda, who won from his stronghold Garhi Sampla-Kiloi in Rohtak district, urged non-BJP outfits to join hands.
The BJP hailed the verdict in Maharashtra and Haryana as a victory of its development agenda, while the opposition parties termed the outcome as a “moral defeat” for the saffron party, claiming that “jingoism does not work when people are living in misery”.
Addressing party workers at the BJP headquarters in Delhi, Prime Minister Narendra Modi said people of Maharashtra and Haryana have reposed their trust in chief ministers of the two states–Devendra Fadnavis and Manohar Lal Khattar– and asserted they will work even harder in the next five years to serve them.
BJP sources said the party’s Parliamentary Board has authorised Shah to take decisions on government formation in Maharashtra and Haryana and that there is no change in chief ministers.
In Maharashtra, the Nationalist Congress Party(NCP) not only improved its performance but fared even better than senior partner Congress by contesting lesser number of seats.
With results announced for 258 out of the 288 seats, the BJP-Shiv Sena alliance got a simple majority with the saffron party winning 94 seats and the latter bagging 54 for a total of 148. The BJP and Sena were also ahead in 11 and 2 seats respectively. The half-way mark is 145.
The NCP and the Congress won 49 and 35 seats and were leading in 5 and 9 seats respectively.
Shiv Sena chief Uddhav Thackeray set the tone for tough bargaining amid speculation that the “50-50” formula for power-sharing could be a rotating chief ministership or equal sharing of ministries.
“Maharashtra mandate is an eye-opener for many,” Thackeray told reporters in Mumbai.
“We had agreed to contest fewer seats (than the BJP), but I cannot accommodate the BJP every time. I should allow my party to grow,” Uddhav said, indicating that he would drive a hard bargain.
Fadnavis, Shiv Sena leader Aaditya Thackeray, and Leader of Opposition in Legislative Council Dhananjay Munde who trounced estranged cousin and BJP minister Pankaja Munde in a keenly-contested poll battle were among the prominent winners.
“Clear mandate by voters, the next government will be of BJP-Sena mahayuti (grand alliance),” Fadnavis told reporters.
Pawar told reporters that the message was that people did not like “the arrogance of power”.
He ruled out the possibility of the NCP and the Congress joining hands with the Shiv Sena to form the government. “The people have asked the Nationalist Congress Party to remain in opposition,” he said, adding the NCP will not try to form government.
In the 2014 polls, the BJP won 122 seats, the Sena 63, the Congress 42 and the NCP 41. The BJP and Sena had then contested separately. The Sena joined the BJP-led government over a month after it was formed.
Fadnavis said despite the BJP ending up winning fewer seats in 2019 compared to the 2014 Assembly polls, its “strike rate” is better this time.
He thanked the people of Maharashtra for giving a “clear and decisive mandate” to the BJP-led Mahayuti (grand alliance), adding his party and the Sena will go by what was “pre-decided” between them on sharing of power.
Fadnavis said the BJP contested 260 seats in 2014 and won 122. “This time, we contested 150 seats and our allies 14 and as per trends, we are likely to win 105 seats. Our strike rate was 47% in 2014, now it is 70%,” he said.
He said the BJP secured 28% votes in 2014 and polled around 26% votes across 164 seats this time. (PTI)