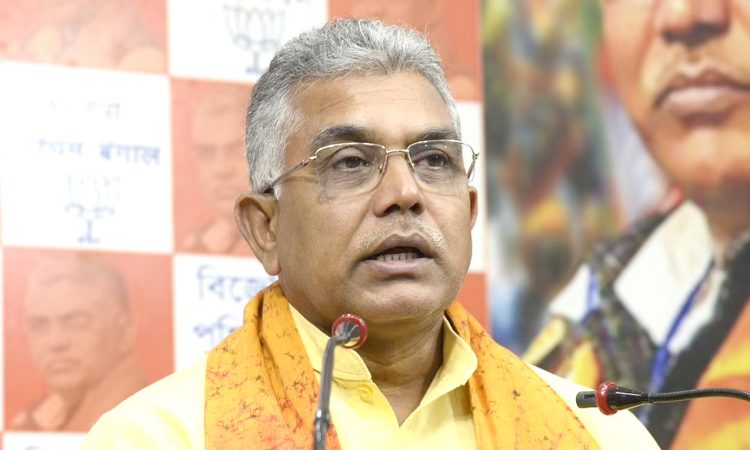 Kolkata, November 13: A day after stones were thrown at his convoy, West Bengal BJP president Dilip Ghosh Friday said though the party is not in favour of imposition of Article 356 and is confident of dislodging the TMC government in the 2021 state polls, it cannot be said now if the escalation in “violence and murders” will eventually lead to such a situation.
Ghosh was speaking to a TV channel and the interview footage was shared on the official Facebook page of West Bengal BJP.
Stones were thrown at his convoy in Alipurduar district on Thursday.
To a pointed question if BJP will demand President’s rule in West Bengal, Ghosh said “We believe any change in power in democracy should be effected through the process of voting. We have to ensure (that) people can cast (their) vote in a peaceful manner.”
He claimed that the demand for President’s rule has been raised by the common people and even some other opposition parties because of “the way the situation is heading with the escalation in violence and murder”.
“As a BJP worker I am proud that our party has faith in the Constitution. We don’t believe in toppling an elected government. This has also been emphasised by our Home Minister Amit Shahji who has said we will defeat this government in the polls”, he added.
The governor is there to file any report about the situation to the Centre, he said.
“I don’t want Article 365 in West Bengal, we are not in favour of it on principle. But the way things are heading, I cannot say whether such a situation will come up in future,” Ghosh said.
Lashing out againt the ruling TMC for throttling democratic norms against its opponents, the BJP leader said 40 false cases had been slapped against him alone.
While Ghosh did not cite any figure about attacks on BJP activists in the state during the interview, he and other leaders of the party had repeatedly said over 120 of its activists had been killed in political violence by miscreants sheltered by the TMC till this date.
“We are trying to dispel the fear among the common man,” he said adding that central forces had ensured that people could by and large vote freely in the 2019 Lok Sabha polls.
Referring to the Thursday attack on his convoy, Ghosh said there had been similar incidents at least six to seven times in the past. “But we (BJP) got the support of 2.3 crore voters in the Lok Sabha elections in 2019.”
Ghosh had earlier in the day alleged that members of Mamata Banerjee’s Trinamool Congress and the Bimal Gurung faction of Gorkha Janamukti Morcha had hatched a conspiracy to carry out the attack on his convoy.
“It was all planned (the attack on the convoy). The TMC leadership knew about it and the police did not take any action to prevent this,” the BJP state president told reporters.
He said several BJP national leaders had reached out to him and inquired about his well being after Thursdays attack on his convoy, which left his vehicle partially damaged.
The ruling TMC has now joined hands with forces it had once labelled as “anti-national” with an eye on the three assembly seats in the Darjeeling Hills.
He also alleged that TMC was distributing money in the Hills and Dooars area to increase its influence and support base in the region.
The BJP leader also accused the TMC of unleashing terror in the Hills and the plains.
But our workers are not scared … We are not scared.
We will continue to hit the streets. The people are with us.
We will ensure that they get to vote freely,” he iterated.
Referring to Prime Minister Narendra Modis recent remark Maut ka khel’ (game of death) cannot get you votes, the state BJP chief said just a day later a BJP sworker was killed in Bengal’s East Midnapore district and his convoy was attacked. “These are telltale signs.
Stones were hurled and black flags shown at Ghosh’s convoy at Jaigaon area in Alipurduar district on Thursday, where he had gone to attend party programmes, police said.
Several GJM activists were seen raising slogans against Ghosh, asking him to leave.
THe situation was brought under control by a police team which forced the GJM protesters and the BJP supporters to disperse.
Protesting against the treatment meted out to Ghosh in north Bengal, activists of Bharatiya Janata Yuva Morcha took out rallies in several parts of the state later in the day. (PTI)