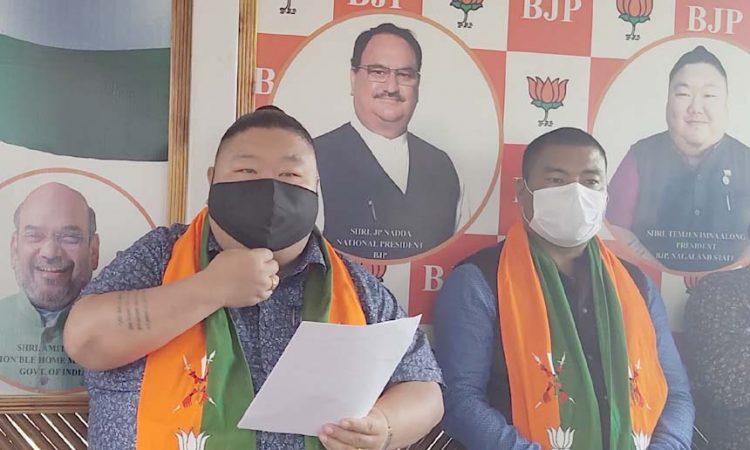 KOHIMA, JUNE 10: Nagaland BJP, while welcoming Prime Minister Narendra Modi’s announcement of free food grains for BPL people and COVID-19 vaccines for all on Thursday, expressed hope that it would benefit the people of the State to fight the COVID-19 pandemic to a great extent.
Modi on June 7 announced to extend Prime Minister’s Garib Kalyan Yojana till November this year and also provide free COVID-19 vaccines for all throughout the country from June 21.

The free food grain scheme of the Central Government was supposed to end in June but it has been extended till November, that is up to Deepawali, and it is a historic announcement by the Modi Government of the second most populous country in the world, said Nagaland BJP president and Minister for Higher Education and Tribal Affairs, Temjen Imna Along during media conference here Thursday.
“Nagaland BJP welcomes this magnanimous announcement of the Prime Minister Modi and on behalf of the people of the State also we are thankful and grateful to the Modi Government”, he said.
He also expressed confidence that the poor people in Nagaland would certainly benefit from the scheme during this COVID pandemic period.
People, especially in villages and those BPL, are struggling with their earnings during this pandemic, and such announcement will go in the annals of the history as one of the most kind hearted Prime Minister and a very assertive Government who very well knows the sufferings of the people, he said.
This will bring much relief to the people during the pandemic, he said.
On being asked about many poor people in the State who are yet to have a ration card to avail the benefit, Along asserted that as a Cabinet Minister he will take up the matter with both the State and Central Governments to help the actual BPL people get the benefit.
Also replying to a query on whether the Fair Price Shops and Village Councils are allowed to take any kind of charge to avail the free food grain, Along asserted that no charge should be imposed on the actual card holders and genuine BPL beneficiaries.
If anyone seeks any charge for the free food grain, it should be brought to the notice of the Government, he said while assuring stern action.

Along also welcomed the Centre’s decision to provide free COVID-19 vaccine to all citizens of 18 years and above.
Vaccines are for all the people and this free vaccination will go a long way to vaccinate all the people by end of this year through fast track implementation of the Central Government, he said.
He expressed hope that with Centre taking the inoculation drive under its control, the vaccines would be distributed fast and implacably and help fight the pandemic very assertively.
Meanwhile, Along appreciated the Chief Minister Neiphiu Rio-led High Powered Committee, Health Minister S Pangnyu Phom, Health Department and frontline workers for their efforts in tackling and managing the COVID-19 pandemic in the State.
He however said that the Government, Department and frontline workers alone cannot manage the fight against the pandemic but the people and civil societies have to join the hands together to overcome the pandemic.
Saying that COVID-19 will here for some more time, Along appealed that people should learn to live with the new normal and follow the Government standard operating procedures which help in easing the lockdown measures and bring back normalcy in the State. State BJP Spokesperson and Noklak District In-charge, W Ngamha Konyak said that the Party in Nagaland has been carrying forward various activities during the lockdown period on the theme “Seva hi sangathan” (service only is organization).
In May, he said, BJP Nagaland has distributed a total of 42,310 mask, 12,620 litres of sanitizers, 6,760 immunity kits, 16,100 packets of free ration to laborers and also conducted thermal scanning of 10,251 villagers.
It has also conducted cleanliness drive in the districts and provided medical provisions to 56 villages and distributed 25,000 N95 facemasks to frontline workers, said Konyak.

The BJP has also provided PPE suits to 350 Health Sub-Centres, Primary Health Centers and Community Health Centres across the State and would endeavour to reach all health centres with PPEs with next 2 weeks, he said.
Towards this end, BJP president Along asserted that the State BJP would continue to extend support to the needy and poor till the lockdown period is over.
BJP Nagaland spokesperson Nini Cheng informed that needy people can contact the State BJP 24×7 helpline number 9863061767 for any assistance.
State BJP Mahila president Phangnon Konyak was also present at the media interaction.
(Page News Service)