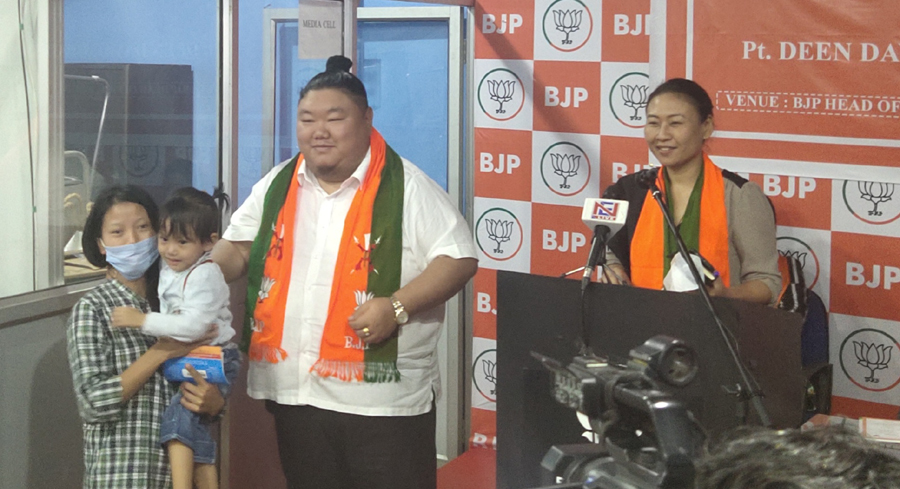 Kohima, September 25: Commemorating the birth anniversary celebration of Pt. Deen Dayal Upadhaya, the BJP Nagaland State Unit Friday launched statewide awareness campaign on Atma Nirbhar Bharat and handed over Sukanya Samriddhi Yojana Account to 10 girl child.
Speaking on the occasion held at the party head office here, BJP Nagaland president and Minister for Higher & Technical Education, Tribal Affairs, Temjen Imna Along said the party envisions to carry forward the goals of its leaders towards empowerment of the people through the Atma Nirbhar Bharat Abhiyan or self reliant India schemes.
Prime Minister Narendra Modi, on May 12, announced a special economic package of Rs 20 lakh crore with the aim of making the country independent against the tough competition in the global supply chain and to help in empowering the poor, labourers, migrants who have been adversely affected by COVID-19 pandemic, he said.
“This is a clear distinctive economic package had been started to push up the trembling economy due to sudden outbreak of COVID-19,” Along said, while asserting that BJP Nagaland would endeavour to reach the people in every nook and corner of the State with the different policies and programmes under Atma Nirbhar Bharat Abhiyan.
“Our central leaders have decided to rely on the capability of the citizens to regenerate the country’s economy,” he said.
“A self reliant Nagaland is very important for a self-reliant India,” he said.
Along said stress would be made on being ‘vocal for local’ by buying the products which are made in India and also locally available.
The awareness would be carried through social media platforms and also conducting campaigns at the different levels, he said.
Paying tributes to Pt Upadhaya, the State BJP president said, “he had ideologically given the guidelines for the BJP to follow in nation building”.
“Pt Deen Dayal Upadhaya was the founding member of Bharatiya Jana Sangh (BJS) which evolved to become the BJP and now the world’s largest political party”, he said.
The vision of empowering the villages and poorer section has been the relentless effort of the BJP leaders, said Along.
Meanwhile, BJP Nagaland Mahila Morcha president Phangnon Konyak informed that they will help facilitate girl child below the age of 10 years in opening up the account under Sukanya Samridhi Yojana.
She said the initiative would be to facilitate at least 100 girl child in every district, while the Mahila Morcha would provide the required amount of Rs 250 per child to the poor and needy families.
On the occasion, at least 10 girl children were provided with bank accounts opened by BJP Nagaland Mahila Morcha, which were handed over by Present Along.
BJP Nagaland spokesperson Akum Pongen shared the biography of Pt Deen Dayal Upadadhaya while secretary Lanuakum O. Tzudir spoke on the Atma Nirbhar Bharat schemes.
(Page News Service)