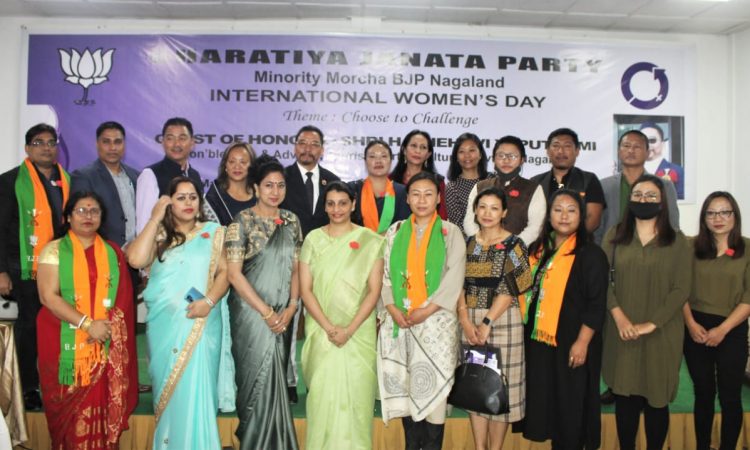 MLA & Advisor H Khehovi Yeputhomi who graced the programme as the Guest of Honour emphasized on the importance of gender equality and women’s rights.
He opined, ” This day gives us an opportunity to reflect on our past and the history that led to the current status of women” and added women are extraordinary beings and are capable of “doing miracles”.
He expressed his gratitude to women for being able to compromise, “women have been compromising for centuries as daughters, sisters, wives, as home makers and as colleagues”.
Stating that society expects women to be multi-taskers, Yeputhomi said this notion has embedded so deeply into our mindsets that they keep compromising to the extent where it is unjust, but made to be accepted as a norm by the society.
Stressing on the theme “choose to challenge”, the Advisor encouraged to challenge negative and narrow concepts of stereotypes that bring about gender inequality and to challenge all the factors that stop us from being our true selves and that limit our abilities.
He also congratulated and thanked all the women leaders and innovators for their outstanding performances and contributions to the society. The prominent ladies who were honoured during the programme were Anita Roy Chowdary, Pushpa Thatal, Neeta Agarwal, Hekani Jakhalu, Dr. Rajani Jain, Jesmina Zeliang, Mamta Karir.
All these prominent ladies, who have achieved and contributed so much to the society, Nagaland State in particular, were acknowledged by the Minority Morcha Nagaland with Appreciation Certificates & stoles, and each were also given time to speak on the dais.
Delivering the key note address, State General Secretary and Incharge of Minority morcha Nagaland, Khevishe Sema stressed on how the BJP led NDA Government at the Centre and PDA Government in Nagaland have made impressive progress over the years to narrow down gender gaps.
“We have more girls in schools, colleges, employees at govt. and private sectors, in Parliament’s in political parties, and in the decision making bodies,” he added. He also reminded how BJP as a party have been adding to the success of gender equality, saying that the party has made very good progress in supporting gender equality through its organizational system by appointing many women in the party key posts both at the central and the state. Adding that, today women have made up nearly 35% of the party workers in the state. He also projected on the several schemes for women being provided by the Modi led govt. in order to reduce the gender gaps.
Earlier, Rev. Binoy Neog, Pastor, Assamese Baptist Church invoked Lord’s blessings. Deep Kumar, State President, Minority Morcha offered the welcome address. Phagnon Konyak, President Mahila Morcha & Wangpho Konyak (Awan), President ST Morcha also spoke on the occasion, besides Bendang Ao, Dimapur District President. Kashito Kiba, Convenor, Professional Cell sang a special number in the honour of the women. All the above speakers were honored with appreciation certificate for their participation. Smt. Nini Cheng, State Co-Chief Spokesperson BJP Nagaland was also felicitated on the occasion.