BJP-JJP alliance to form Govt in Haryana, Dushyant likely to be deputy CM 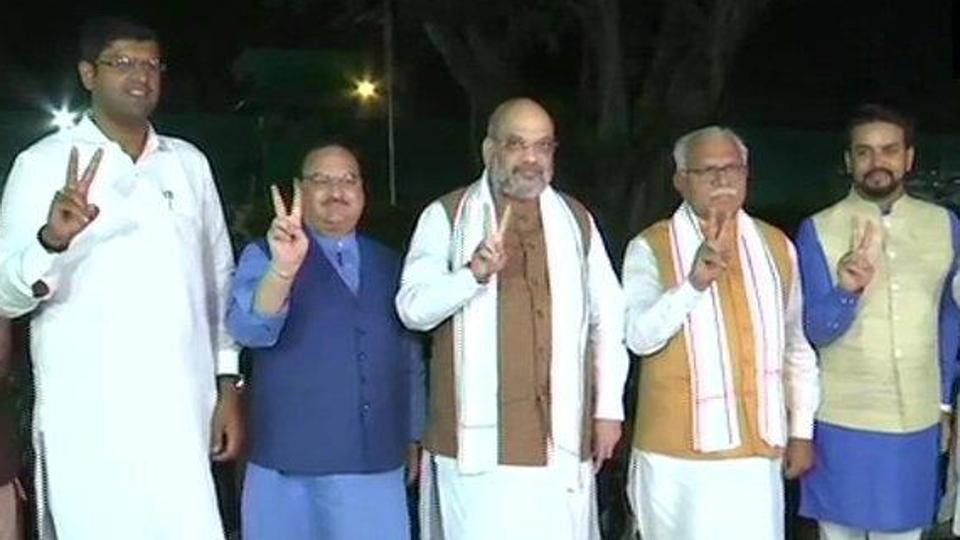 New Delhi, October 25: The BJP is all set to form a new government in Haryana after clinching an alliance with the Jannayak Janata Party, which won 10 seats in the 90-member assembly, by giving it the post of deputy chief minister.
BJP president Amit Shah announced at a press conference, held with JJP leader Dushyant Chautala, that the chief minister will be from his party and the deputy chief minister from the regional party.
Incumbent Chief Minister Manohar Lal Khattar is likely to be elected the BJP legislative party leader at a meeting in Chandigarh on Saturday and will then stake claim before the governor to form the government. Chautala is likely to be his deputy, sources said.
“Going by the mandate of the voters of Haryana, leaders of both parties have decided that BJP and JJP will form the government together. The chief minister will be from the BJP and deputy chief minister will be from the JJP,” Shah told reporters.
The alliance is in line with the “spirit” of people’s mandate, he added.
Shah and Chautala were also joined by Khattar and other BJP leaders at the press conference.
Chautala said his party believed the alliance was necessary for stability in Haryana.
The BJP’s decision to win over Chautala underlines its quest to placate Jats, a dominant community in the state who are believed to have voted mostly against the saffron party in the recent polls, to ensure a smooth run of its government.
Khattar said both the parties had worked together in the past.
Sources said Shah had spoken to Chautala even before the results were out, following inputs that the BJP might not get a majority on its own.
Top BJP leaders moved swiftly since Thursday night to cobble together a majority in Haryana after the party’s tally fell to 40 in the state, six short of the majority mark. Most of the seven independent MLAs have also pledged their support to the party.
Majority of the independent MLAs are BJP rebels and several of them have given their letters of support to Khattar during a meeting at the residence of the party’s working president, JP Nadda, in the national capital.
The saffron party faced flak after controversial MLA Gopal Kanda, an accused in two abetment-to-suicide cases, announced his support to its bid to form the government in Haryana.
Senior BJP leader Uma Bharti appealed to her party not to forget its moral goals, a suggestion that it should not be seeking Kanda’s support for forming government.
Apparently on the defensive, senior BJP leaders ensured that they were not seen with Kanda even as other Independent MLAs were seen moving in and out of Nadda’s residence after announcing their support to the saffron party.
BJP’s Haryana in-charge Anil Jain said the party’s top brass would take a call on the controversial MLA’s support.
BJP leaders are also confident of lone Indian National Lok Dal (INLD) MLA Abhay Chautala’s support to its government.
Union minister Nirmala Sitharaman and BJP general secretary Arun Singh will attend Saturday’s legislative party meeting as central observers, Jain said. (PTI)

No guarantee Trump will back India against China if tensions escalate: Former US NSA John Bolton