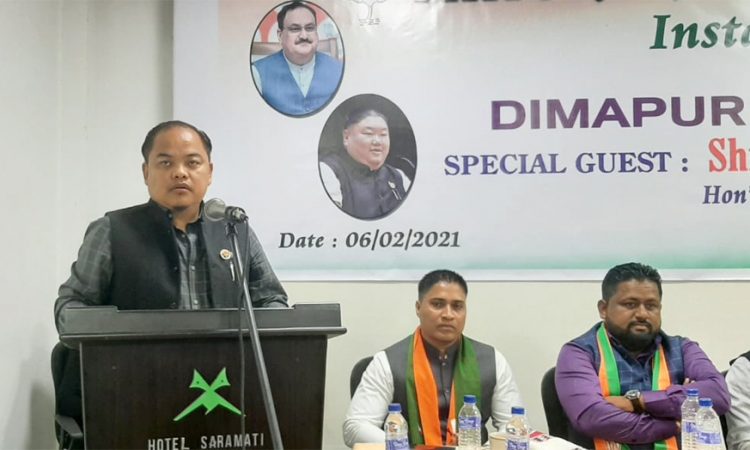 DIMAPUR, FEBRUARY 6: Advisor for Power, Tovihoto Ayemi on Saturday said that the opposition in the country is trying to create a perception that BJP is anti-Muslim, “which isn’t the case”, and pointed out that the president of the BJP’s Minority Morcha is a Muslim.

Speaking as the special guest during the installation programme of Dimapur district and the mandals of the minority morcha, Ayemi said that the opposition during their successive governments only talked about the minorities but under the leadership of Prime Minister Narendra Modi, they are seeing “visible developments” as the NDA government functions according to the mantra of “sabka saath sabka vikas sabka vishwas.”
Citing that BJP alone has 303 MPs and CMs in 16 states, he referred to BJP as “the party of all”, and said BJP believes in inclusiveness and gives due recognition to all the loyal karyakartas.
According to him, it was a matter of pride for so many people from different professions, cultures, religions, and walks of life to come together and form the minority morcha.
He added that it brings communities together not just for political reasons “but for all aspects”.
Ayemi also suggested that party enrolments would have been much higher in 2020 if not for the pandemic.
State BJP unit general secretary and in-charge of Minority Morcha, Khevishe Sema also called for coordination between the mandals and the district.
He told the attendants not to worry about the implementation of ILP in Dimapur, or think negatively about the party because of it, as the system has been put in place to keep illegal immigrants outside and not the genuine people for whom, if they follow the process and norm, there isn’t anything to be anxious about.
Calling the minorities asset for the party in the state, he asked the members to work for the upcoming election and be kingmakers.
Party spokesperson and co-incharge of Minority Morcha, Pintu M Ghosh said that while other parties come to power and misuse it, BJP works for the poor and the needy.

In the presidential address, State president of Minority Morcha, Deep Kumar informed that currently six districts in Nagaland have minority morchas, and Peren and Wokha will have morchas soon. (Page News Service)