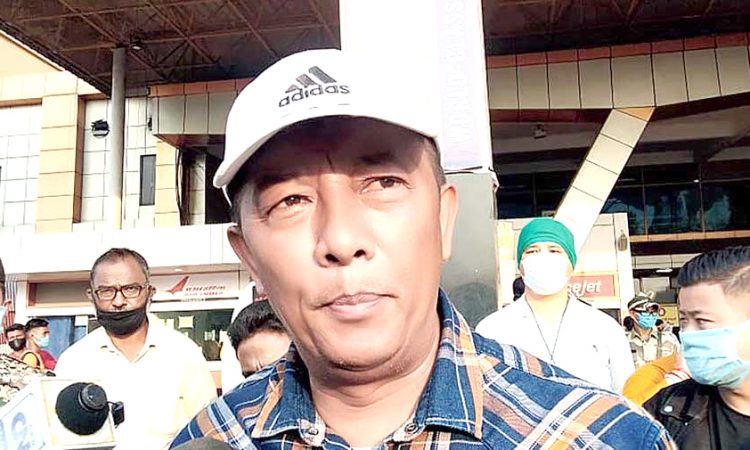 Binay Tamang at the Bagdogra airport on Monday, before leaving for Calcutta to meet Mamata Banerjee.

SILIGURI, NOVEMBER 3: Gorkha Janmukti Morcha leader Binay Tamang on Monday said that he did not consider rival Bimal Gurung a threat and the latter would not figure in his talks with Chief Minister Mamata Banerjee scheduled for Tuesday.
Tamang, who along with party colleague Anit Thapa on Monday headed for Calcutta from Bagdogra to attend Tuesday’s meeting with Mamata at Nabanna, for the first time in years spoke about Gurung with whom he had severed ties in 2017.
After a gap of 3 years, Gurung resurfaced in Calcutta last month to ally with Trinamul while announcing he was walking away from the BJP, the party with which he had been in an alliance since 2009.
“Bimal Gurung and Roshan Giri can never be a threat to me… On the other hand, it is Binay Tamang who can be a threat for them”, asserted Tamang in Bagdogra when asked if Gurung’s comeback in the hills would affect his political career.
Tamang labelled Gurung as a “fugitive leader”. He added that Gurung would not be a subject of Tuesday’s meeting with Mamata.
“First of all, we want to make it clear that we will not share any political or administrative platform with Bimal Gurung and Roshan Giri. He (Gurung) is a fugitive leader and all I can say that nobody is above law. We should all respect the judiciary”, Tamang said. “We will have an administrative meeting with the Chief Minister. He (Gurung) is not at all a subject of it. The meeting has been planned to usher in development and to ensure peace and stability in Darjeeling hills and in the Dooars”, he added.
Interacting with newspersons, Tamang tried to prove that Gurung’s decisions and remarks had not gone down well with hill residents by referring to demonstrations and protest rallies organised by his faction against Gurung.
During the past 10 days, supporters of both Bimal Gurung and Binay Tamang factions have been trying to assert themselves in what is being viewed as a game of political one-upmanship. Such events have been held in many places across the hills, right from the district headquarters of Darjeeling to hilly hamlets like Mungpoo and raised the political heat in the hills.
While the Gurung lobby is desperate to prepare ground for their leader away from the hills for over 3 years now, the Tamang faction is trying to retain its support base.
“The spontaneous expression of resentment by common people of hills, who are also taking part in (our) rallies and organising protest marches, is a clear indication as to what they want”, said Tamang.
Such remarks a day ahead of the meeting with Mamata, hints that Tamang wants to reassert his strength in the hills, said political observers.
They also opined that for the past 3 years, the Tamang faction was the sole ally of Trinamul in the hills, but now have a competitor in the form of the Gurung lobby.
It is evident that both factions will now try to prove their support base before Mamata Banerjee and her party colleagues to get preference from Trinamul, said an observer.
“Through these remarks, Tamang has made the first move on Monday. It would be interesting to see how the Gurung faction reacts, and more importantly, how the Trinamul leadership manages to strike a balance”, he said. (Courtesy: TT)