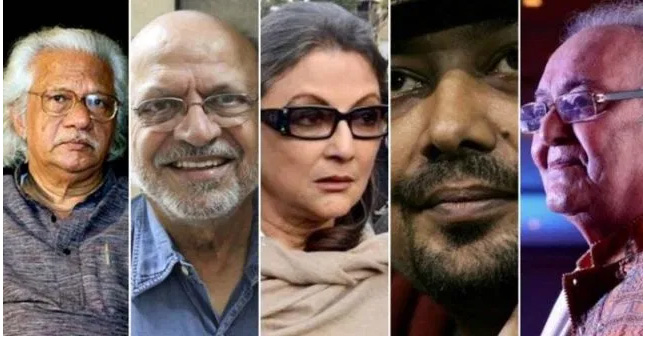 Patna/Muzaffarpur, October 9: The Bihar police has ordered closure of a sedition case lodged against nearly 50 celebrities, including filmmakers Shyam Benegal, Mani Ratnam and Anurag Kashyap, and the complainant would be prosecuted for levelling “false” allegations, a top police official said.
The development comes after a number of opposition leaders and prominent personalities condemned the filing of the FIR last week on the complainant by a Muzaffarpur-based advocate against the celebrities who had signed an open letter seeking Prime Minister Narendra Modi’s intervention in “rising incidents” of mob lynching across the country.
The Additional Director General of Police (Headquarters), Jitendra Kumar, said on Wednesday the case was lodged at Muzaffarpur in the wake of the Chief Judicial Magistrate’s order under Section 156(3) of the CrPC.
Under the provision, the police had “no option but to register a case under sections which the reading of the complaint discloses”, he said.
The ADG said the matter was supervised by SSP Muzaffarpur.
“The complainant could not produce supporting documents or evidence, not even the alleged letter written by the 49 persons, which may support his claim of commission of any offence,” he said.
“On this and other circumstantial basis, the case is found to be false and order has been issued by him to investigating officer to submit Final Report- False. Along with this, finding this to be an intentional purpose of complainant, prosecution under sections 182 and 211 (of the IPC) will be submitted against complainant for lodging a false case,” the ADG added.
Those named as accused by advocate Sudhir Kumar Ojha, who had filed the petition on July 23, also included historian Ramachandra Guha, actors Soumitra Chatterjee, Aparna Sena and Revathi and light classical singer Shubha Mudgal.
Bollywood personalities Kangana Ranaut, Madhur Bhandarkar and Vivek Agnihotri who were critical of the open letter were named as “witnesses”.
The FIR was lodged at the Sadar police station upon receipt of an order passed by Chief Judicial Magistrate Surya Kant Tiwari in August.
The filing of the FIR evoked criticisms from top opposition leaders like Rahul Gandhi even as close to 200 celebrities this time including historian Romila Thapar and actor Naseeruddin Shah among others came out with another open letter asking how an appeal to the Prime Minister could be construed as seditious.
Last week, Bihar Chief Minister Nitish Kumar’s intervention was sought by his former associate and RJD national vice president Shivanand Tiwary who pointed out that Guha, named as an accused, was among those intellectuals who have lavished praise on the JD(U) chief.
An embarrassed Deputy CM Sushil Kumar Modi, who is also a senior BJP leader, came out with a statement earlier in the day clarifying that his party or the Sangh Parivar did not have anything to do with the sedition case.
The Deputy CM also dubbed Ojha, whom he did not mention by name, a “serial litigant” by whom he was also named as accused in a case a few years ago.
Sushil Modi, however, also attacked the “award wapasi and tukde-tukde gangs” for trying to take advantage of the episode to allege that the Modi government at the Centre was throttling freedom of expression.
Meanwhile, Ojha remained unfazed when he was approached by journalists after the Police Headquarters came out with its statement.
“Any number of petitions have been filed on the basis of my complaints and these have been pending for as long as 10 years. I wonder how the police came to a conclusion in this matter in just a few days. I will file a petition against the police,” the maverick lawyer declared. (PTI)