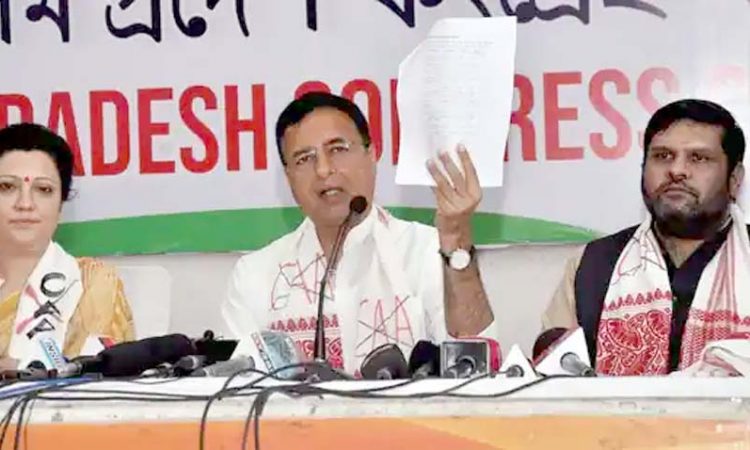 Guwahati, March 18: Launching a blistering attack on Prime Minister Narendra Modi, the Congress on Thursday posed a set of questions to him, alleging that big announcements made by him for Assam have translated to a “big zero”.

Addressing a press conference here, All India Congress Committee general secretary Randeep Singh Surjewala said Assam is known for its culture, tolerance, moderation, goodwill and harmony in the entire country.
“… But in the past five years, to quench BJP’s thirst for power in Assam, not only have they sown seeds of division, but also they have attacked the language and land of Assam through the Citizenship (Amendment) Act (CAA),” he said.
Assam can tolerate everything but not lies, deception and falsehood, the Congress spokesperson said.
“From PM Narendra Modi to Assam CM Sarbananda Sonowal, they are serving mendacity to the people of Assam in the name of development. Big announcements were made but the outcome is a big zero,” Surjewala said.
Earlier in the day, the prime minister addressed an election rally at Karimganj in the Barak Valley of Assam to campaign for BJP candidates.
The Congress wants to ask Modi 10 questions on behalf of the people of Assam, he said.
“The first question is about Modi’s fake promise in the world’s largest river island Majuli, where he had given a speech on March 26, 2016 and promised to build a bridge over the Brahmaputra. Today, we want to ask why there was no development related to it.
“Now, on the eve of the Assam Assembly poll, why are they speaking lies, performing ‘bhoomi poojan’ of the bridge from Majuli to Jorhat, entailing a cost of Rs 925.47 crore?” Sujewala said.
In 2017, the BJP had announced that a 1,300-km expressway will be built on both banks of the Brahmaputra for Rs 40,000 crore, the senior Congress leader said.
“But on February 8, 2021, the Rajya Sabha was informed that there was no proposal to build an expressway in Assam.
Why have you cheated the people of Assam?”
Sujewala also slammed the BJP, alleging a conspiracy to eliminate the identity of Assam with the introduction of the contentious CAA.
“Why do you want to harm the indigenous culture and civilisation of Assam? Modi promised to implement CAA in West Bengal. On the other hand, they said their government will not implement CAA in Tamil Nadu, but he is silent in Assam. Why is this double standard?” he said.
Listing out 20 projects worth nearly Rs 11,000 crore, Surjewala said the BJP and Modi collected votes by proclaiming such developmental works, but these have now been “thrown into the dustbin”.
“There has been total misgovernance in Assam in the last five years with all vital parameters going down. The state GDP went down to 6.3 per cent from 15.87 per cent when Congress had left, ranking of Assam slipped to 20th place from 2nd and per capita growth dipped to 3.4 per cent from 13 per cent,” he claimed.
The opposition leader also said that Assam is now recognised as the “most unsafe place for women in the entire nation” with the state witnessing 80,794 cases of crimes against women in the last three years.
“BJP has made Assam the hub of child trafficking. What is your answer to the crimes against women? he asked the prime minister.
Surjewala pointed out that according to the National Family Health Survey, the schemes related to women and children have fallen prey to corruption during the last five years.
“In 2015, 35 per cent children in the 6-59 month category suffered from anemia, but it increased to 68.4 per cent in 2020. Moreover, 66 per cent of pregnant women of 15-49 years are suffering from anemia in 2020 against 46 per cent in 2015. Who will take responsibility for all this?” the Congress leader said.
On June 25, 2015, the Pradhan Mantri Awaaz Yojana started but till now, out of 2.19 lakh families selected, only 20,895 houses were constructed by the Sonowal government, he claimed.
“Nowadays, Modi is talking negatively about the West Bengal Jal Jeevan Mission, but he does not say anything about the BJP-led states. He had announced Rs 3,60,000 crore for the mission, but the truth is that a total amount of only Rs 22,000 crore, which is only 6 per cent, was provisioned.
“Modi had promised Assam that out of 63.25 lakh rural families, 59 lakh will get water under the scheme. But after three years, why 56 lakh families are still deprived of its benefits?” Surjewala said.
He further claimed that the Central government had allotted Assam Rs 1,608 crore under this scheme, but only Rs 523 crore was dispatched to the state and the Sonowal government spent only Rs 398 crore.

Regarding the healthcare sector, Surjewala said: “In the Community Health Centres of rural areas in Assam, the number of physicians, specialist doctors for women and children, surgeons should be 708, but only 136 are available which is 85 per cent less.”
He also said the progress of AIIMS in Guwahati, which was announced in May 2017, is just 37 per cent.
“For this, Rs 1,123 crore was estimated, of which only Rs 341 crore was allotted. However, Rs 258 crore out of that is a higher education financing agency loan,” he added. (PTI) 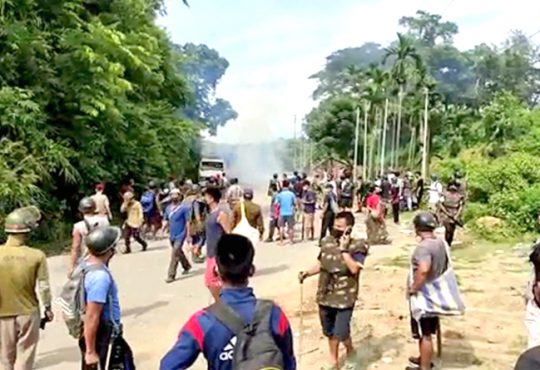