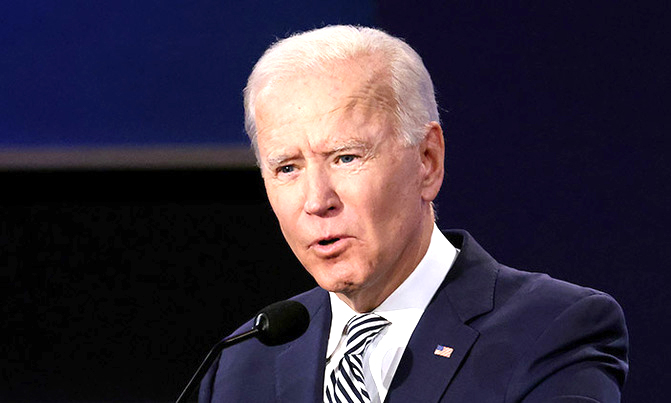 WILMINGTON, October 3: US Democratic presidential candidate Joe Biden and several other politicians have wished President Donald Trump and First Lady Melania a quick recovery from the novel coronavirus.
Trump, 74, and Melania, 50, were tested positive for Covid-19 on Friday.
“Jill and I send our thoughts to President Trump and First Lady Melania Trump for a swift recovery. We will continue to pray for the health and safety of the president and his family,” Biden tweeted on Friday.
Former US president Barack Obama also wished the couple a speedy recovery.
“Michelle and I hope that the President, First Lady, and all those affected by the coronavirus around the country are getting the care they need and are on the path to a speedy recovery,” he said.
The coronavirus has so far infected 7,332,019 people and claimed 208,693 lives in the US — both the numbers highest in the world.
Wishing Trump and Melania a speedy recovery, former US president Bill Clinton hoped for the safety of the White House staff, the Secret Service and others putting their lives on the line.
In her message, Trump’s 2016 Democratic challenger Hillary Clinton said the pandemic has affected so many and “we must continue to protect ourselves, our families, and communities”.
Democratic vice-presidential candidate Kamala Harris, former US Ambassador to the UN and the first ever Cabinet-ranking Indian-American in any administration Nikki Haley, senators Dianne Feinstein and Chris Coons
were among other leaders who prayed for the president and the first lady’s good health.
Meanwhile, Trump’s sons and daughters on Friday asked fellow Americans to pray for the fast and speedy recovery of the president and the first lady.
“You are a warrior and will beat this. I love you dad,” Trump’s daughter Ivanka, 38, tweeted after the president was taken to a military hospital in a Washington DC suburb.
Trump flew to the Walter Reed National Military hospital late Friday evening, while the First Lady stayed back at the White House. She had only a mild cough and headache, said president’s physician Sean Conley. As a
precautionary measure the president received a single 8-gram dose of Regeneron’s polyclonal antibody cocktail.
“I ask you to join me in praying for his recovery. I have never been more proud of someone and what they have had to endure,” Trump’s younger son Eric tweeted after the president landed at the Walter Reed Military hospital.
The president “is a true warrior. He will fight through this with the same strength and conviction that he uses to fight for America each and every day”, he said.
Vice President Mike Pence and Trump Campaign’s spokesperson Hogan Gidley also joined others to pray for Trump and Melania’s health.
Indian-Americans joined fellow countrymen in sending messages of speedy recovery of the president and the first lady and said that they are with them.
“This is praying for — and wishing the greatest President ever — Trump, and First Lady a swift recovery,” said Al Mason, co-chair of Trump Victory Indian American Finance Committee.
According to Dr Raj Bhayani, American people understand that Trump is sacrificing his own health for the sake of the country.
Several Indian-Americans have announced to organise prayer meetings for the president.
“We are organising prayer meetings for the swift recovery of President Trump — in temples around many cities,” said Hemant Bhatt from New Jersey.
“We all have been offering prayers to the goddess of war (Durga) whose mythology surrounds fighting the bad and evil forces such as pandemic, that threaten peace and happiness and well-being. Invoking her blessings to cure
and protect and a speedy recovery of our beloved President and the First Lady,” said another Indian-American Sridhar Chityala.
“We wish President Trump an early recovery, and we are very confident that he will not be symptomatic like most people. We will pray for his and his wife complete recovery and health,” said Dr Reena and Dipak Nandi, an IndianAmerican couple.
According to Ajay Jain Bhutoria, National Finance Committee member of the Biden campaign, the president’s diagnosis shows the importance of following safety protocols, as wearing masks in public. (AFP)