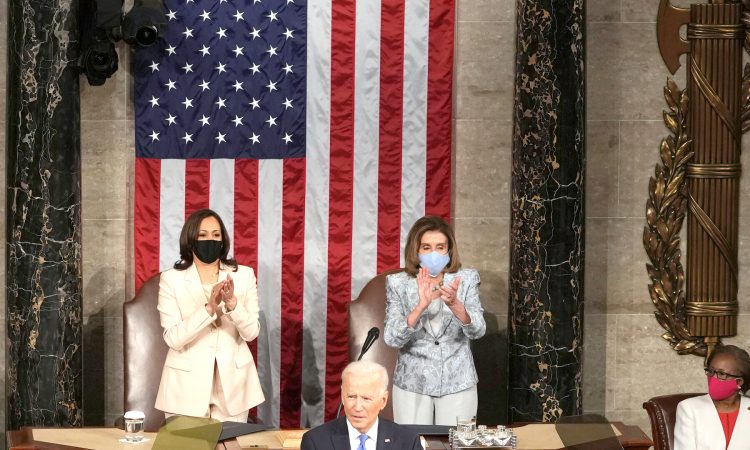 NEW YORK, APRIL 30: President Biden laid out an ambitious agenda on Wednesday night to rewrite the American social compact by vastly expanding family leave, child care, health care, pre-school and college education for millions of people to be financed with increased taxes on the wealthiest earners.

Invoking the legacy of Franklin D Roosevelt, Biden unveiled a $1.8 trillion social spending plan to accompany previous proposals to build roads and bridges, expand other social programmes and combat climate change, representing a fundamental reorientation of the role of Government not seen since Lyndon B Johnson’s Great Society and Roosevelt’s New Deal.
“We have to prove democracy still works, that our Government still works and we can deliver for our people,” Biden said in his first nationally televised address to a joint session of Congress.
Taken together, the collection of initiatives that Biden has introduced in his first 100 days in office suggest a breathtaking scope of change sought by a 78-year-old President who spent a lifetime as a more conventional lawmaker.
After presenting himself during last year’s campaign as a “transition candidate” to follow the volatile tenure of Donald J Trump, Biden has since his inauguration positioned himself as a transformational President.
But the succession of costly proposals amounts to a risky gamble that a country deeply polarised along ideological and cultural lines is ready for a more activist government and the sort of redistribution of wealth long sought by progressives.
Biden’s Democrats have only the barest of majorities in the House and Senate to push through the most sweeping of legislation and, successful or not, he may have framed the terms of the debate for the next election.
“Our best future will not come from Washington schemes or socialist dreams,” Senator Tim Scott, Republican of South Carolina, said in his party’s televised official response. “It will come from you ~ the American people.”
For Biden, who watched such speeches as a Senator or Vice-President for nearly a half-century, it was the first time behind the microphone setting the agenda for what was the functional equivalent of a State of the Union address. “It’s good to be back,” he said as he greeted lawmakers.
Coming in the latter days of the Coronavirus pandemic and less than 4 months after a mob of Trump supporters stormed the Capitol, though, the event was unlike any other presidential speech as Biden faced a half-empty chamber.
On the advice of the Capitol physician, only 200 members of Congress and other officials were invited instead of the usual 1,600, and all were wearing masks in assigned seats at least 6 feet apart.

The President, who fist-bumped his way down the aisle, arrived amid tighter security than usual, with streets around the building closed and patrolled by swarms of police officers and National Guard troops. (NYTNS)