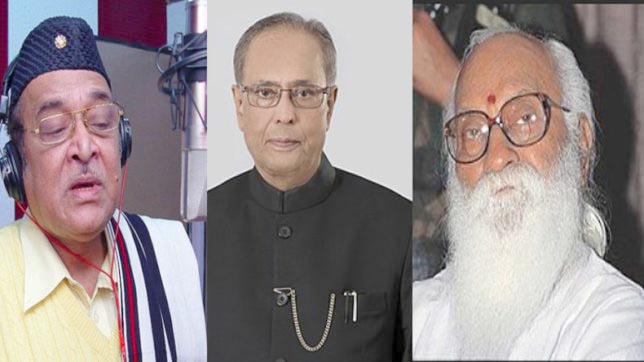 New Delhi, January 25: The Rashtrapati Bhawan has announced that India’s highest civilian honour, Bharat Ratna, will be conferred on former President Pranab Mukherjee. Social activist Nanaji Deshmukh and eminent musician-singer Bhupen Hazarika will also be given the highest honour posthumously.
Shortly after the announcement, Prime Minister Narendra Modi took to Twitter to congratulate Pranab Mukherjee and recall the contributions of legendary Nanaji Deshmukh and Bhupen Hazarika, who have been honoured with the award posthumously.
Referring to the former President, Prime Minister Modi said that he “is an outstanding statesman of our times”. The Prime Minister said that Pranab Mukherjee had left a “strong imprint on the nation’s growth trajectory”.
“Pranab Da is an outstanding statesman of our times. He has served the nation selflessly and tirelessly for decades, leaving a strong imprint on the nation’s growth trajectory. His wisdom and intellect have few parallels. Delighted that he has been conferred the Bharat Ratna,” tweeted Prime Minister Modi.
The Prime Minister also recalled social activist Nanaji Deshmukh’s “stellar contribution towards rural development”. Nanaji empowered those living in villages, said the Prime Minister.
“Nanaji Deshmukh’s stellar contribution towards rural development showed the way for a new paradigm of empowering those living in our villages. He personifies humility, compassion and service to the downtrodden. He is a Bharat Ratna in the truest sense!” he tweeted.
Recalling the contribution to Indian art and culture by music maestro Bhupen Hazarika, the Prime Minister tweeted, “The songs and music of Shri Bhupen Hazarika are admired by people across generations. From them radiates the message of justice, harmony and brotherhood. He popularised India’s musical traditions globally. Happy that the Bharat Ratna has been conferred on Bhupen Da.” (Agencies)