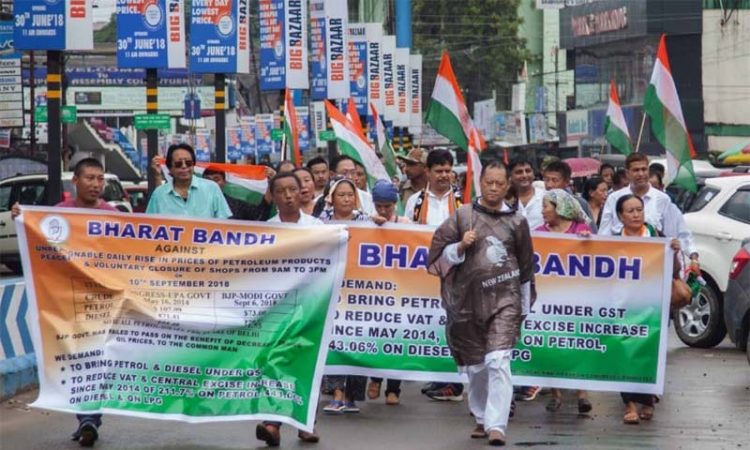 Kohima/Dimapur, September 10: ‘Bharat Bandh’, a call of the Congress party to voluntarily join the peaceful protest against unreasonable daily rise in prices of petroleum products in the country evoked mixed response in Nagaland.
In Kohima, there was no impact of the bandh, but the NPCC organised a brief programme to express its resentment at Congress Bhavan here.
In Dimapur, the Bharat bandh received widespread support from the business community with almost all business houses downing their shutters. However, vehicular traffic was normal with no restriction.
Petrol prices in Kohima have sky-rocketed to Rs 78.87/l and diesel is Rs 70.86/l.
Addressing the gathering, NPCC vice president Khriedi Theünuo said the daily price of petroleum products in the country has not only placed heavy burden upon the public, but put their livelihood in acute danger.
He lambasted the Union petroleum minister of is making excuses that the oil and petroleum exporting countries have promised to increase the petroleum production but they are unable to do and because of that a global issue has erupted and the price rise. While another reason cited by the petroleum minister, he said is the unrest in Iran and Venezuela.
This, Theünuo said, are lame excuses only to eyewash the people but in reality the it is all because of the corrupt governance of the prime Minister Narendra Modi led NDA government that prices of petroleum products have been increasing.
The impact of the price rise on the common people is huge but the government is unable to stop the price rise, he said while lamenting that this is because of the weak or poor management by the NDA government.
Prices of petroleum products have increased because the NDA government has increased the taxes in the excise duty and from 2014 till date an amount of Rs 11 lakh crores has been collected through this tax, he said.
“We are suffering today because of ‘Fuel loot’, he said, while urging the party men and women to unitedly fight the corrupt practices of the NDA government.
“Let us stand together and fight for the rights of the people,” he appealed while maintaining that Congress party is for the welfare of the people and good governance.
The Congress vice president also demanded that petroleum products should be brought under GST, reduction of VAT and Central Excise which has increased since May 2014 by 443.06% on diesel, by 211.7% on petrol and on LPG, to ease the burden on the common man.
Meanwhile, the NPCC has denounced the act of the State police in removing the Bharat Bandh banners pasted at various locations in Dimapur and Kohima in order to sabotage protestors.
Removal of posters an attack on ‘freedom of expression’: Therie
Nagaland Pradesh Congress Committee (NPCC) President K Therie on Monday blamed the state government and Chief M Neiphiu Rio for the removal and disappearance of at least 50 posters and banners from different locations in Dimapur calling the act politically motivated and an attack on the ‘freedom of expression’.
He said that the information that was provided in the banners were in public interest and public would not have done such a thing.
Speaking to the media fraternity on the backdrop of ‘Bharat Bandh’ here at Congress Bhavan, Dimapur he informed that the objective of the bandh is to bring petrol, diesel and LPG under the 12% slab of GST which would make the prices of petrol and diesel Rs. 10 to Rs. 15 cheaper and before that can be done, the state government should reduce the rate of VAT taking cue from the government of Rajasthan where after a reduced VAT the prices of petrol and diesel got cheaper by Rs. 2.50.
Giving a comparative analysis of the prices of petrol and diesel under former PM Dr. Manmohan Singh and present PM Narendra Modi, he said that if Dr. Singh were the prime minister of India, under present circumstances, the price of petrol would have been Rs. 45 per liter and diesel would have been Rs. 36 per liter.
He explained that during the time of Dr. Manmohan Singh, India used to acquire crude oil paying 107 USD per barrel and the price of petrol and diesel per liter used to be Rs. 71.41 and Rs. 55.49 respectively. But now that the price of per barrel of crude oil has fallen to 73 USD, the price has rocketed still to Rs. 80.50 and Rs. 73 (Delhi rates) per liter for petrol and diesel.
He also questioned how more than 80% increase in the price of LPG from Rs. 412 to Rs. 764 under PM Modi.
Another objective of the band, he explained, is to reduce central excise increase since May 2014 of 211.7% on petrol and 443% on diesel and on LPG.
Expressing gratitude on the occasion towards all who supported the bandh from shopkeepers, petrol pumps to vehicle owners, he said that the success of the peaceful and voluntarily called bandh has sent a strong message to the government in Delhi and this will bring changes.
NPCC general secretary Capt. G.K. Zhimomi put the blame of removing the banners on the ‘government agencies’ and said that this is the first time in Nagaland that the voice of people and the party was tried to be suppressed.
He also termed the bandh a success.
Previously in the morning, the members of party had taken out a march in protest of the removal of banners and posters till Police Commissioner Office at Dimapur and lodged an FIR for the same asking for immediate investigation and only left after they were assured of swift and proper investigation.
(Page News Service)