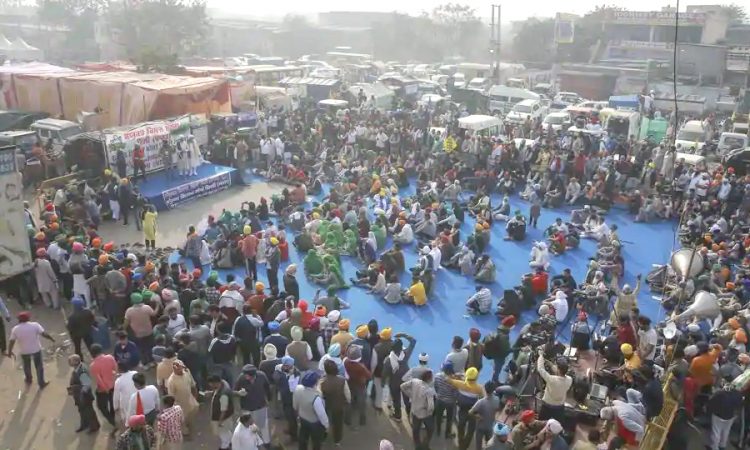 Farmers protest at the Singhu border between Delhi and Haryana, on Monday, a day before ‘Bharat Bandh’. (AP Photo)

New Delhi, December 7: The farmers protesting against the three farm laws passed by Parliament have given a ‘Bharat Bandh’ call in a signal that they are intensifying their stir. The nationwide strike will begin at 11 am and go on till 3 pm, as the protesters said they don’t want to cause problems for the common man. The Centre has tried to find a solution to end the stir, but five rounds of talks so far have not been able to placate the farmers.
In Delhi, the police have made elaborate security arrangements and warned that strict action will be taken against those trying to disrupt movement of people or “forcefully” shut shops. The farmers have been protesting near the national capital since November 26.
The Delhi Traffic Police have said that Singhu, Auchandi, Piao Maniyari, Mangesh, Tikri and Jharoda borders (on the Haryana side) are closed. The National Highway-44 has also been closed on both sides. So those travelling are suggested to take alternative routes via Lampur, Safiabad and Saboli borders. Those travelling towards Noida have been advised to take DND as the Chilla border on the Noida Link road too is closed for traffic, it said. The Ghazipur border on NH-24 is also closed for traffic from Ghaziabad to Delhi.
• The farmers’ stand: The farmers from Punjab and Haryana, who have been protesting for the past 11 days, are adamant that the three farm laws should be repealed. They have called these laws “anti-farmer”, saying they would pave the way for eliminating the safety cushion of minimum support price (MSP) and do away with mandis, leaving them at the mercy of big corporates.
• What the government has said: The Centre has projected these three laws – the Farmers’ Produce Trade and Commerce (Promotion and Facilitation) Act, 2020, the Farmers (Empowerment and Protection) Agreement on Price Assurance and Farm Services Act, 2020, and the Essential Commodities (Amendment) Act, 2020 – as major reforms in the agriculture sector that will remove the middlemen and allow farmers to sell anywhere in the country. The government has said that it won’t rollback the laws, but has agreed to amend them as demanded by the farmers. Another round of meeting is scheduled on December 9.
• The parties backing Bharat Bandh: Political parties like the Congress, Nationalist Congress Party (NCP), Shiv Sena, Aam Aadmi Party (AAP), Telangana Rashtra Samithi (TRS), Rashtriya Janata Dal (RJD), Trinamool Congress (TMC), Dravida Munnetra Kazhagam (DMK), Samajwadi Party, Jharkhand Mukti Morcha (JMM) and Indian National Lok Dal (INLD) have supported the Bandh call. The AAP will hold a peaceful demonstration at 11 am at the ITO crossing in the national capital on Tuesday in support of the nationwide strike.
• What about banking and trade unions? A joint platform of 10 central trade unions has extended its support to the ‘Bharat Bandh’ call. These trade unions are – Indian National Trade Union Congress (INTUC), All India Trade Union Congress (AITUC), Hind Mazdoor Sabha (HMS), Centre of Indian Trade Unions (CITU), All India United Trade Union Centre (AIUTUC), Trade Union Co-ordination Centre (TUCC), Self-Employed Women’s Association (SEWA), All India Central Council of Trade Unions (AICCTU), Labour Progressive Federation (LPF) and United Trade Union Congress (UTUC). A number of bank unions have expressed their solidarity with protesting farmers and requested the government to resolve their issues at the earliest. However, bank unions – like All India Bank Officers’ Confederation (AIBOC) and All India Bank Employees’ Association (AIBEA) – have said that they will not participate in the ‘Bharat Bandh’.
• Transporters and traders: Transporters’ union AIMTC on Monday said it will suspend operations in the entire country on Tuesday to support the Bharat Bandh called by agitating farmers. The All India Motor Transport Congress (AIMTC) is the apex body of transporters, representing about 95 lakh truckers and other entities. Some auto and taxi unions in New Delhi, including those associated with app-based aggregators, have also decided to join the ‘Bharat Bandh’ on Tuesday. However, many other auto and taxi unions have decided to continue normal services despite their support to demands raised by the agitating farmers. Traders’ body CAIT and All India Transporters Welfare Association on Monday said markets across the country including in Delhi will remain open on Tuesday and the transport sector will function as usual. In Mumbai, BEST buses and taxis will ply as normal.
• Railway union AIRF extends support: The All India Railwaymen’s Federation on Monday extended its support to Bharat Bandh on December 8 called by farmer unions which have been protesting on Delhi’s borders against the Centre’s new farm laws. Shiva Gopal Mishra, general secretary, All India Railwaymen’s Federation (AIRF) met the agitating farmers at Singhu border and assured them that members of the railway union are with them in their fight against the new agriculture laws. (Courtesy: HT)