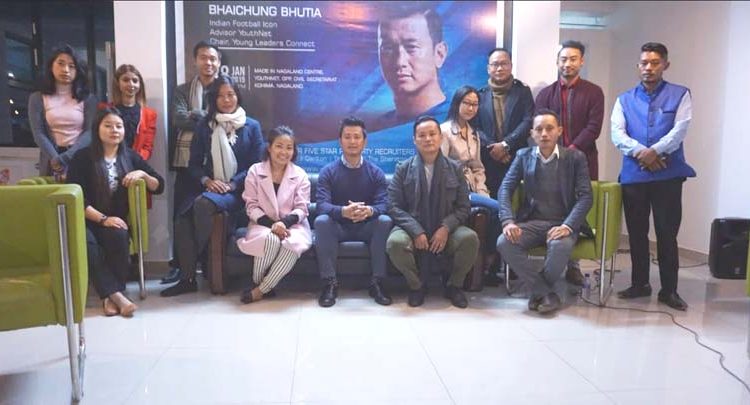 Kohima, January 28: YouthNet’s Hospitality Program, a 100% Job Guaranteed Training and Employment Program fully sponsored by PMKVY Scheme under Ministry of Skill Development & Entrepreneurship, was officially launched by Indian Football icon and advisor YouthNet, Bhaichung Bhutia at the Made In Nagaland Centre, Kohima today.
Speaking on the occasion, Bhutia stressed on the importance of venturing outside one’s own comfort zone and exploring various avenues of employment besides Govt. Job, particularly highlighting his initial struggles and challenges as a young footballer from the North East, he motivated the youth to have passion, dream big and work toward fulfilling those dreams.
Also mentioning his wife who underwent Hotel Management training herself and subsequently worked for a reputed five star hotel, he highlighted the tremendous potentials and scope of Hospitality sector not only in Hotels but even in the Sport Industry.
The launch was chaired by Hekani Jakhalu, Chair & Founder YouthNet and opening remarks delivered by Director YouthNet Lezo Putsure.
Co-Founder & CEO, Bhaichung Bhutia Football Schools India, Kishore Taid gave a brief highlight about the Football Academy he co-founded with Bhutia.
The launch program was attended by the Hospitality Course Trainees, delegates, youth and students from different schools and colleges in Kohima. (Page News Service)