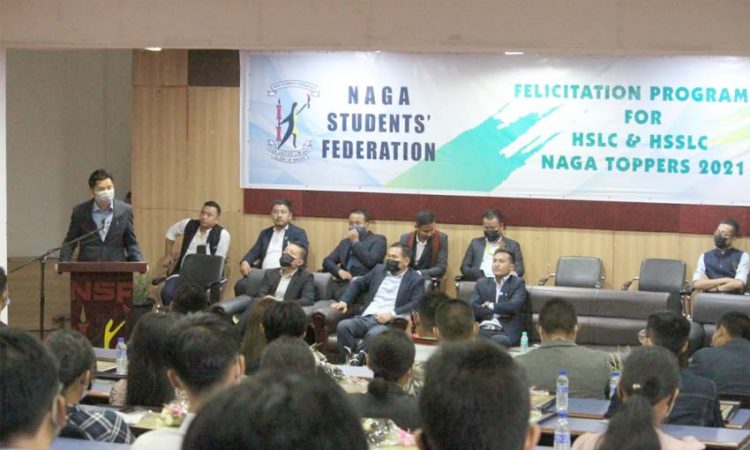 KOHIMA, SEPTEMBER 2: “Making it big in exam is excellent but enhancing one’s maturity is more important”, said Kesonyu Yhome, Secretary for Finance & PHED, Government of Nagaland, at the Naga Students’ Federation (NSF) felicitation programme for HSLC and HSSLC Naga toppers of 2021 at Capital Convention Centre, Kohima on Thursday.
Forty-nine HSLC students and 21 HSSLC students were felicitated.
While lauding the students’ achievement, Yhome reminded them that it was just the beginning. The real taste of life and its challenges will begin from now, he said.

Yhome stressed on the many ills that are prevalent in Naga society and underscored the need for students to see the broad picture by moving away from the confines of the book and understand the things that are really happening around in the State.
Stating that unemployment continues to remain a big concern in the State, he informed that as per data available from the Periodic Labour Force Survey 2017, Nagaland has over 60,000 registered educated unemployed youths, which is the highest in the Northeast; and in the all-India unemployment ranking, Nagaland occupies the 2nd position.
Yhome also shared his concern on unemployment in the State by presenting a survey which was carried out by the Directorate of Evaluation, Government of Nagaland, in 2007. In the survey that was carried out at Kohima, Dimapur and Mokokchung, it was found that there were around 45,815 non-Naga workforce earning their livelihood in the State with an annual income of Rs. 45,60,00,000.
This becomes a huge concern when the fact is taken into account that such amount of money is not circulated in Nagaland but remitted to the respective States from where the non-Naga work force originally came, he added.

Addressing the many facets of unemployment in Nagaland, Yhome also pointed out that Nagas are not ready or willing to do manual labour. “We don’t have the capacity in terms of skill sets nor do we have the desire because we feel that since we are educated such jobs are below us”, he lamented.
He also said that another big concern for the State is that Nagas have become so used to the idea of ‘easy money’ and ‘easy living’. From top to bottom, every section of the people in Naga society has become prone to making easy money but in truth the lifestyle and the income does not correspond, he said. In this regard, Yhome implored the students to be aware and not fall into the temptation of choosing the easy way out when faced with challenges in life.
Yhome also pointed out that 10 Nagaland districts were found to be the worst performing, in a survey conducted by NITI Aayog, among 103 districts in the Northeast, with certain specific targets based on the parameters of sustainable development goals 2030.
Nagaland also has the dubious distinction of having the 2nd highest HIV/AIDS prevalence rate in the whole of India with a prevalence rate of 1.45 % as opposed to 0.22% which is to the national average.

He also informed the gathering that of the 191 languages that were declared endangered by UNESCO, all the indigenous languages of Nagaland are further added, the responsibility of preserving the language falls on the students.
Stating the reason for raising these issues on a day that is meant to felicitate the student for their academic excellence, Yhome stressed on the need for effective participation of the students as they go on to occupy key positions and roles in their respective lives because the issues that blight Naga society should be collectively addressed both from within the Government and from outside.
NSF President, Kegwayhun Tep also lauded the students on their success. Sharing an experience, he said that most of his peers who were toppers were leading “miserable lives” in the present day as they did not find their purpose. He further encouraged the students to follow their heart and keep on striving for excellence.
Keneino Thorie of Trinity School, Kohima, who secured 1st position among the toppers in the recently declared HSLC 2021 results, spoke on behalf of the students.

She said that the current Coronavirus scenario has completely changed and transformed the academic lives of every student. “The pandemic has rendered physical classes unfeasible and we had to transition into taking online classes, it was an entirely different experience and we met lots of challenges”, she shared. Yet it was the relentless efforts of the teachers, continuous support from parents and hard work that helped through the tough times, she said.
The NSF also launched its quarterly bulletin “Vanguard” at the felicitation programme. Social and Cultural Secretary, Benjong Longchar informed that the magazine has been in existence since the 1980s.
He said that the journal played a vital role in connecting to the young readers and Naga people at large by addressing the pressing issues in the State with a holistic approach. However, the publication was discontinued owing to various reasons.
The magazine has been revived to promote the Federation’s activities, current affairs and issues of common interest which concern the youths and the Naga people.
(Page News Service)