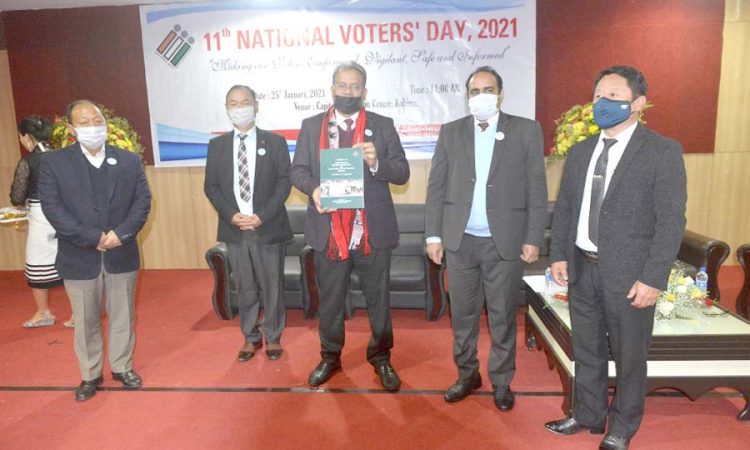 Kohima, January 25: Nagaland Chief Electoral Officer, Abhijit Sinha, IAS on Monday appealed to call citizens to be always vigilant against any kind of electoral malpractices and be fully literate about the electoral processes so as to be able to make informed decisions during elections.

Addressing the 11th National Voters Day celebration here at the Capital Convention Center today on the theme ‘Making our voters empowered, vigilant, safe and informed’, the CEO also appealed to all eligible citizens to exercise their right without fear, intimidation and inducement.
On the perspective and background of National Voters Day, Sinha said in order to effectively deal with the problem faced by the voters, the Election Commission (EC) decided to take up a vigorous exercise to identify all eligible voters attaining the age of 18 years as of January 1 every year in each of the 8.5 lakh polling stations across the country.
Such eligible voters will be enrolled on time and handed over their Electoral Photo Identity Card (EPIC) on January 25th every year. This initiative is expected to give the youth a sense of empowerment, pride and inspire them to effectively deal with this problem, he said.
On the occasion, State Chief Secretary, J Alam, IAS called upon all to remember the countless number of people who are silently working behind the scenes to facilitate the process of registering everyone and making them eligible to vote in elections and who are also contributing to conduct free and fair elections.
Highlighting that conducting elections is a mammoth exercise and there are a lot of issues, he said, “Since the voting process is the basis of what kind of Government we get, it becomes very important to continuously educate voters to be fully informed about the promises and policies, which the political parties and candidates plan to implement.”

Alam further said that e-EPIC system which was launched on the same day is completely hassle free and is a portable document that can be downloaded on mobile or on a self-printable form on the computer.
The Chief Secretary also released ‘A Glimpse of Systematic Voters Education & Electoral Participation (SVEEP) activities in Nagaland’ in the programme. (Page News Service)