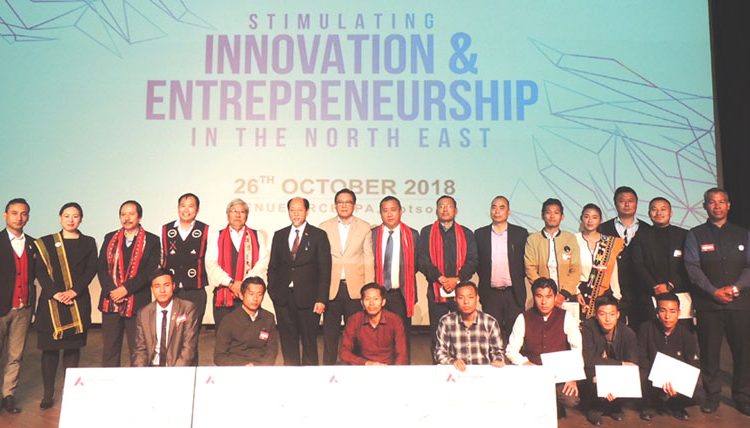 Kohima, October 26: Nagaland Chief Minister Neiphiu Rio on Friday conferred the first Entrepreneurs Associates Innovation Fund (EAIF) Award to three Naga youths.
The (EAIF) Award includes Rs 2 lakh each with citation and 3 years of free mentorship by Entrepreneurs Associates, an organization working to nurture the entrepreneurial aspirations of individuals and communities since the year 2000.
Young scientist, M Sc student of Kohima Science College Jotsoma (KSCJ), Peihauding Zeliang was conferred the award for inventing ‘Organic Healing Paste’ and ‘Bio-enhancer’.
The second recipient is Bachelor of Science student of KSCJ, Zenwang Konyak for his innovation of Umbrella Harvest, also known as U-Harvest to address water scarcity during dry seasons.
Tsenshithung Yanthan, a young Government employee, was the third awardee for inventing Band Saw or a portable sawmill.
Congratulating the awardees during the launching function held at RCEMPA Jotsoma, Chief Minister Rio said big dreams with minimum work will not produce result but one needs to work hard with consistency in order to achieve success.
Maintaining that Nagaland is solely dependent on the financial funding of the Central Government, Rio however said that efforts should be made to enhance our own economy with innovations and entrepreneurship.
“Our own products should be promoted and we should start small with an aim for higher achievements,” he said.
He lamented that problems of financial support due to lack of banks in the interior rural is a prime cause of discouraging entrepreneurship. He said that out of the 74 Rural Development blocks in the State, 30 RD blocks are unbanked.
Another problem is the inability of mortgaging the land as in Nagaland people are the owners of land and there is no legal documents, he said adding that the State Government has passed a resolution to relax land laws, particularly in the Foothills where commercial activities can happen.
Younger generations, wanting to do viable and profitable business, have to migrate to places where things are cheap, raw materials are available and cost effective and therefore the government resolution says that land owners, tribal hohos and villagers should come forward to survey their land and make legal documents (pattas) so that it can be mortgaged.
He said that the strength of Nagas lies in textile, cultural tourism, agro-based industry and organic produces.
In this, the CM while stating that Nagaland has 65% youths below the age of 30 years, who can do many things with innovations and entrepreneurship, encouraged young Nagas to be positive and more broad-minded to grasp the opportunity.
Rio challenged the young Nagas to work extra hard to achieve the dream of having and successful innovative entrepreneurship in the State.
CEO and Coordinator of Entrepreneurs Associates & Group of Social Ventures, Neichute Doulo while highlighting the future of innovations and entrepreneurship in the region said that innovations and start ups are powerful business processes which attract investors.
Maintaining that finance is critical for start ups and innovations, Duolo requested the Chief Minister to help them access start ups from financial institutions by providing a State Government guarantee.
Such initiatives will foster Start Ups to bloom in Nagaland and also help in making the state an ‘Innovation Hub’.
“EA will work to make Nagaland an Innovation Hub and for this to happen, we will need the support and partnership of the government,” he said.
“Using the existing lab infrastructure of educational institutes, we can encourage the scientific temper for innovation amongst young minds, he said adding that using the ingenious aptitude of our people, we must encourage creative problem solving ideas.
Innovators must be recognized and nurtured, he said adding that while intellectual property rights needs to be streamlined, we must ensure research & development stays in our region.
This will ensure growth and also sustain start up momentum in our region, he added.
The launching day was also marked by special talk on entrepreneurship in the second session wherein Additional Chief Secretary Temjen Toy spoke on the topic – The Nagaland Government’s perspective on innovation & entrepreneurship; Team Leader EA Manipur Gopen Keisham Moses – The entrepreneurial truth about failure; Model & Founder Cache Naga, Hobby Haven, Ketholeno Kense – Why I got into business and Fonder Ete Coffee Nagaland, Lichen Humtsoe – Creating opportunities in Nagaland: The story of Ete Coffee