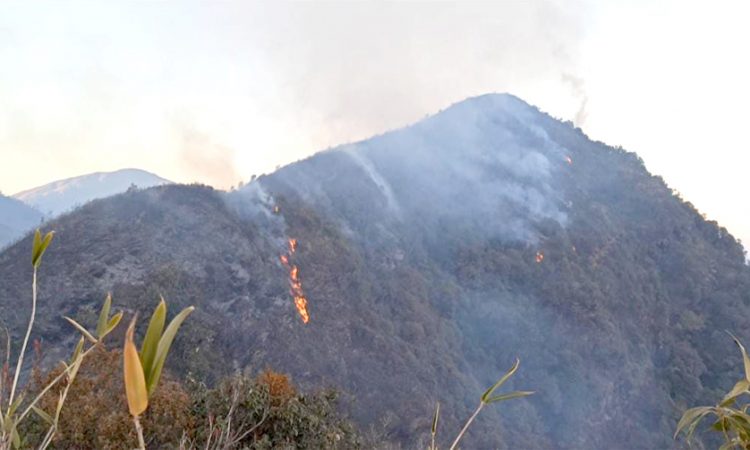 Our Correspondent
KOHIMA, DECEMBER 30: Battle against the wildfire at Dzükou range, which cradles the picturesque Dzukou valley, a tourist hotspot of Nagaland, was adjourned for the second day with the wind only aiding the fire to ravage the range in patches across a stretch of more than 2 kilometres.

Volunteers of the Southern Angami Youth Organization (SAYO), who were stationed at the valley to make arrangements for Governor RN Ravi’s visit to Dzukou valley today, have been trying to douse the fire since it was first reported on December 29 afternoon.
In the twilight hours of the second day, joint efforts were made to douse the fire however it proved inadequate to bring the fire under control. On the contrary, the smoke billowing out from across the valley painted the horizon, which pans across the valley, to crimson red.
As per initial reports, the actual cause of the fire has not been ascertained however there are reasons to believe that it might have been an accidental man-made disaster, apparently by some trekkers.
With no sign of the fire lessening at the Dzukou range, a heavy draft of wind continues to blow outwards from the valley along the gorge making the fire spread more rapidly.
A SAYO official informed that Kohima DC, SP, District Administration SDO (Civil) Jakhama, and Khuzama PS OC and officials visited the site on the second day.
He also said that the Forest Department Ranger along with Department officials also inspected the site.
The SAYO also said that they are contemplating on enrolling the help of NSDMA and the Indian Air Force, in coordination with Governmental agencies, Forest Department, Police and District Administration to make a joint effort to douse the fire.
Earlier during the day, Governor of Nagaland R N Ravi visited the valley which had been planned before the fire incident started. The Governor, during his trip, also inspected the valley.
On the other hand, OSD of Nagaland State Disaster Management Authority, Johnny Raungmei said that the Kohima District Disaster Management Authority has also requisitioned personnel of the SDRF, Police and Assam Rifles to cut the fire line along with local volunteers in the area under fire.
He also said that Indian Air Force choppers would be used on Thursday to completely douse off the fire.