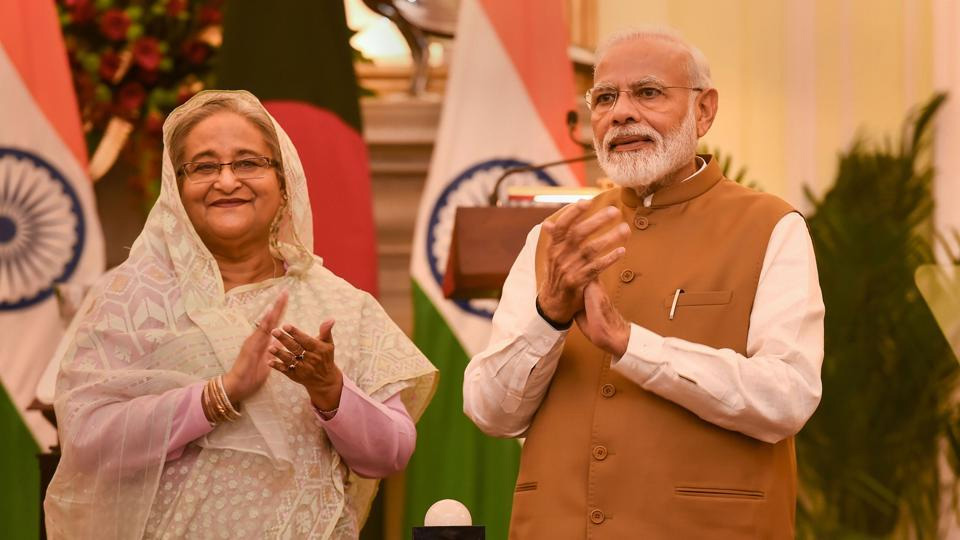 New Delhi, October 5: Bangladesh on Saturday said it was keeping an eye on developments relating to roll out of the National Register of Citizens (NRC) in Assam even as India conveyed to it that the issue was an internal matter of the country.
Bangladesh Foreign Secretary Shahidul Haque said Prime Minister Sheikh Hasina raised the issue with her Indian counterpart Narendra Modi during wide-ranging talks and he explained to her about the NRC process.
“We were told that this is an internal matter of India. Our relationship is best of the best at present. But at the same time we are keeping our eyes quiet open (on the issue),” Haque said at a press conference.
On long-pending BBIN motor vehicles agreement, Haque indicated that India, Nepal and Bangladesh may go ahead with the pact if Bhutan does not come on board.
The Bangladesh-Bhutan-India-Nepal (BBIN) motor vehicle was mooted to improve transportation among the four countries.
Asked about Home Minister Amit Shah’s comments that illegal Bangladeshi’s from Assam would be deported, the Bangladeshi foreign secretary said: “We should not make a crisis out of nothing at this stage and we should be able to wait and see.”
Government sources said the Indian side conveyed to Hasina that publication of the NRC was a court-monitored process and the final scenario on the issue is yet to emerge.
Haque said Bangladesh is not worried about the issue at the stage.
“We think this is an internal matter of India. Prime Minister Modi has explained to Prime Minister Hasina the process that India has put up in terms of making sure that everybody is eventually included in this (NRC),” he said.
The NRC has been prepared to identify genuine Indian citizens living in Assam since March 24, 1971, or before, and identify illegal Bangladeshi migrants in the state.
Out of 3.3 crore applicants, over 19 lakh people were excluded from the final NRC published on August 30.
Prime Minister Hasina had taken up the issue of NRC with Modi during their bilateral meeting in New York last month on the sidelines of the IN General Assembly.
After the roll out of the NRC, the Ministry of External Affairs said people left out of it are not “stateless” and will continue to enjoy all the rights as before till they exhaust all remedies available under the law.
“The case of movement of people is a global issue. There have always been issues relating to mobility of people among neighbourting States,” said Haque, while citing example of a similar issue between the US and Mexico.
On the Rohingya issue, Haque said Modi appreciated Bangladesh’s generosity in sheltering and providing humanitarian assistance to forcibly displaced persons from the Rakhine State of Myanmar.
A joint statement issued after talks between Modi and Hasina said India will supply a fifth tranche of humanitarian assistance to support Bangladesh’s humanitarian efforts to shelter the Rohingyas in temporary camps in Cox’s Bazar.
To a question, Haque said Bangladesh is not holding back any Rohingya refugees and anyone wanting to return to Myanmar are free to leave the country.
“The two prime ministers agreed on the need to expedite safe, speedy and sustainable repatriation of the displaced persons to their homes in the Rakhine State of Myanmar.
“They agreed on the need for greater efforts to be made to facilitate their return, including by improving security situation and socio-economic conditions in the Rakhine State of Myanmar,” the joint statement said.
On the BBIN, the joint statement said both Modi and Hasina agreed on early operationalisation of the pact for movement of goods and passengers among the member countries which are willing and ready to finalise it.
Prime Minister Hasina extended an invitation to Modi to pay a visit to Bangladesh and it was accepted, Haque said.
The dates of Modi’s visit would be finalised through diplomatic channel, he said. (PTI)