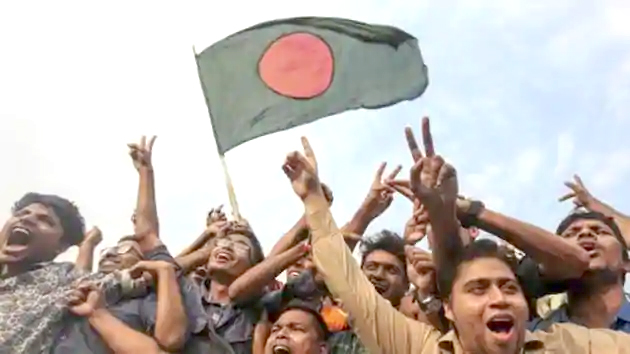 Bangladesh would celebrate the golden jubilee of Independence on March 26, 2021. (AP Photo)

Dhaka, March 17: Bangladesh on Wednesday began the 10-day golden jubilee celebrations of the country’s independence from Pakistan along with the birth centenary of the Father of the Nation ‘Bangabandhu’ Sheikh Mujibur Rahman.
The high-profile celebrations to be held from March 17 to 27 mark the country’s independence from Pakistan after the 1971 Liberation War.

Indian Prime Minister Narendra Modi and heads of state and government from Nepal, Sri Lanka and Bhutan are to join the celebrations under separate schedules amidst the COVID-19 pandemic. Several other world leaders and dignitaries have sent video messages to mark the golden jubilee celebrations.
Bangladesh President Abdul Hamid on Wednesday welcomed his Maldivian counterpart Ibrahim Mohamed Solih as he arrived on a three-day visit to the country to join the celebrations.
President Solih was escorted to the National Memorial on the outskirts of Dhaka to pay homage to the 1971 martyrs. He offered wreaths, planted a sapling and signed the visitors’ book during his visit there.
For his extraordinary contributions to the nation, Bangla, Bangladesh and Bangabandhu emerged as a single and identical symbol, President Abdul Hamid said in a statement on the eve of the 10-day festival.
March 17 is a memorable day in the history of the Bangalee nation as on this day in 1920 the greatest Bangalee of all time, the architect of sovereign and independent Bangladesh, Father of the Nation Bangabandhu Sheikh Mujibur Rahman was born in Tungipara of Gopalganj district, he said.
Hamid, along with Prime Minister Sheikh Hasina, paid homage at Bangladesh’s founder’s portrait at Bangabandhu Memorial museum early in the morning in a sombre ceremony, while military bugles played the last post as they placed wreaths on his portrait there.
Hasina, who is the elder daughter of Bangabandhu, in a statement urged the nation to join hands to take Bangladesh to higher heights in the international arena. (PTI)
Let us take a vow to transform Bangladesh into a safe and peaceful home for our next generation, she said.
The premier said her government was working tirelessly to build a hunger-and poverty-free developed and prosperous Bangladesh as envisioned by the Father of the Nation by formulating and implementing Vision-2021′, Vision-2041′ and Delta Plan-2100′.
The Maldivian president also visited Bangabandhu Memorial Museum, originally the Bangladesh founder’s private residence where he was gunned down in a military coup on August 15, 1975 along with most of his family members, including the youngest 10-year-old Sheikh Russell.
Hasina and her younger sister Sheikh Rehana survived the carnage as they were on a brief tour to Germany at that time.
President Solih placed a wreath on the Bangabandhu portrait and signed the visitors book.
The celebrations dominated Bangladesh’s print and electronic media with the Daily Star, a major critic of the current government, calling Bangabandhu The shepherd of independence .
In the stillness of the evening that enveloped the sleepy village of Tungipara in Gopalganj subdivision, a baby boy was born . . . this little boy became the undisputed leader of Bengalees half a century later, the report read.
Sri Lanka’s Prime Minister Mahinda Rajapaksa will arrive on March 19 on a two-day tour. Nepal President Bidya Devi Bhandari will be in Dhaka on a two-day visit from March 22 while Bhutanese premier Lotay Tshering will be in the country from March 24 to March 25.
Prime Minister Modi will arrive on March 26 on a two-day visit and will join the main Independence Day celebrations that also marks 50 years of Bangladesh-India diplomatic relations.
Prime Minister Modi paid homage to ‘Bangabandhu’ Sheikh Mujibur Rahman on his birth anniversary on Wednesday and said he is a hero for all Indians.
Sheikh Mujibur Rahman, the founding father of Bangladesh, was born on March 17, 1920.

“My heartfelt homage to Bangabandhu Sheikh Mujibur Rahman, a champion of human rights and freedom, on his birth anniversary,” Modi tweeted.
“He is a hero for all Indians too. It will be my honour to visit Bangladesh later this month for the historic #MujibBorsho celebrations,” he said.
Bangladesh had originally planned grand celebrations for the 50th years of Independence and Bangabandhu’s birth centenary but the coronavirus pandemic forced the country to revise the plan on health grounds. (PTI)