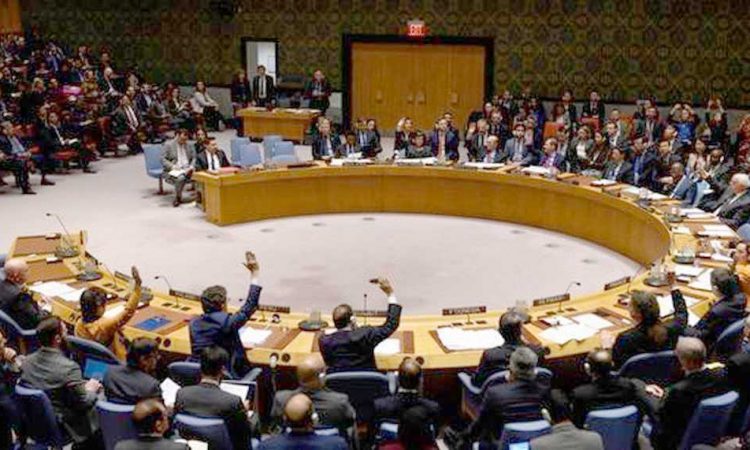 Actions include those being taken by diplomats at the U.N. Security Council in New York. Pictured is a UNSC meeting. | Photo Credit: AFP

New Delhi, March 8: With military action on the Jaish-e-Mohammad training camp in Balakot officially “over,” the government is now pushing for multipronged diplomatic action across world capitals to ensure the UNSC lists JeM chief Masood Azhar as a terrorist on March 13th, sources involved in the outreach said. However, they also warned, “If there is any subsequent terrorist attack then all options are available for the government of India.”
The sources listed actions being taken by diplomats at the U.N. Security Council in New York, the Financial Action Task Force in Paris and through friendly countries who are exerting pressure on Pakistan directly to take “credible” action against Azhar, and other leaders of the JeM as well as Lashkar-e-Taiba chief Hafiz Saeed.
“We are taking steps to reach out to all 15 members of the UN Security Council who are also members of the 1267 (al-Qaeda affiliated terror listing) Committee, both in their capitals and at the U.N. itself. No stone will be left unturned by us to do this,” the sources said, adding that India had also reached out to all countries of the United Nations to add their pressure on their regional representatives at the UNSC to clear the listing.
At present, apart from permanent members U.S., U.K., France, Russia and China, the UNSC comprises Belgium, Ivory Coast, Dominican Republic, Equatorial Guinea, Germany, Indonesia, Kuwait, Peru, Poland and South Africa.
As The Hindu had reported last week, the government has already shared its dossier on the JeM and its link to the Pulwama attack with the Pakistan government, and with other countries at the U.N. In the copy of the UNSC listing filed by France, U.K. and U.S., which was exclusively accessed in this paper, Azhar has been named for “financially supporting” JeM, for recruiting jihadi volunteers for Afghanistan to fight “western forces”, and for the Pulwama attack on February 14th that killed 40 Indian police officers, which the JeM has claimed responsibility for.
Govt ‘encouraged’ by China’s decision
The sources said they could not confirm whether China would allow the Masood Azhar listing this time or put a hold on it as it has three times in the past three years, but that the government was “encouraged” by China’s decision to allow a UNSC statement calling for action against the JeM, and by EAM Sushma Swaraj’s visit to Beijing last week.
“Should [the listing] happen, the political signal to Pakistan would be huge”, the official said, adding that after the Masood Azhar listing which was the “first step”, the government would proceed against other terrorist leaders in Pakistan. Meanwhile India will also keep the pressure on UN members to ensure that Hafiz Saeed, who is on the 1267 terror list, is not allowed to “go all over the place” and meet with Pakistani Ministers from the Imran Khan government.
Under the UNSC sanctions, designated entities are banned from travel outside the country, face an assets freeze and can’t access weapons.
Finally, the sources said that the government will “carefully document” each action by the Pakistan government as part of its obligations to the FATF “between now and June”. The international terror-financing watchdog will complete a review in May 2019 on the basis of a 27-point action report and recommend a possible blacklisting if Pakistan doesn’t comply, later this year. (Courtesy: The Hindu)