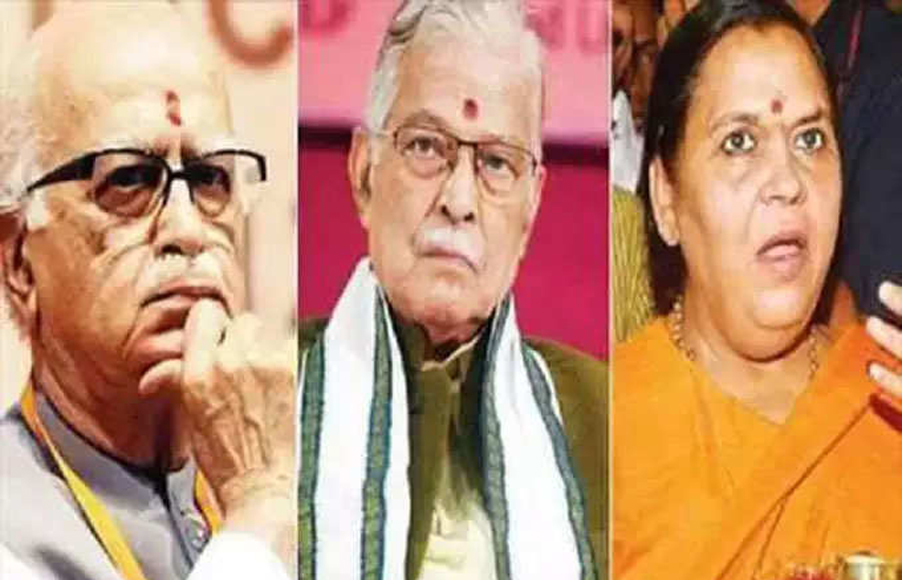 Lucknow, September 30: All the 32 accused in the Babri mosque demolition case, including BJP veterans L K Advani and MM Joshi, were on Wednesday acquitted by a special CBI court here which said there was no conclusive proof against them.
Delivering the much-awaited verdict in the 28-year-old case, CBI judge S K Yadav did not accept newspapers and video cassettes as evidence.
The court also observed that late Vishwa Hindu Parishad leader Ashok Singhal wanted to save the structure because Ram idols were inside.
The case relates to the razing of the disputed structure in Ayodhya on December 6, 1992, which triggered riots for several months leaving nearly 2,000 people dead across the country.
The structure was demolished by ‘kar sevaks’ who claimed that the mosque in Ayodhya was built on the site of an ancient Ram temple.
The 32 accused, include former deputy prime minister Advani, former Union minister Joshi and Uma Bharti, former Uttar Pradesh chief minister Kalyan Singh, during whose tenure the structure was pulled down, besides Vinay Katiyar and Sadhvi Rithambara.
Champat Rai, the general secretary of the trust in charge of constructing the temple, was among the accused.
Yadav had on September 16 directed all the 32 surviving accused to remain present in the court on the day of the judgment. Today was the last working day of Yadav.
However, Bharti (61) and Singh (88) are convalescing in separate hospitals after coronavirus infection and were not present in the court at the time of pronouncement of order.
Advani (92), Joshi (86), Nritya Gopal Das and Satish Pradhan were also not present in court. Singh, during whose tenure as chief minister of Uttar Pradesh the disputed structure was demolished, was put on trial in September last year after his tenure as governor (of Rajasthan) came to an end.
With the Supreme Court setting August 31 as the deadline and later extending it by a month for the CBI court to give its verdict, the trial court started day-to-day hearing to complete the task on time.
The central agency produced 351 witnesses and 600 documents as evidence before the court. Charges were framed against 48 people, but 16 have died during the course of trial.
The trial under the serious criminal conspiracy charges commenced against them after having been dropped by the trial court in 2001. The verdict was upheld by the Allahabad High Court in 2010, but the apex court ordered restoration of the conspiracy charge against them on April 19, 2017.
The top court ordered daily hearing in the high profile case and directed the special judge to conclude it in two years.
The charge of conspiracy was in addition to the existing charges against them for promoting enmity between different groups on grounds of religion.
The accused were also facing charges of having made assertions “prejudicial to national integration and injuring or defiling a place of worship”.
The other charges against them included indulging in “deliberate and malicious” acts intended to outrage religious feelings, uttering statements leading to public mischief, rioting and unlawful assembly.
The CBI had argued that the accused conspired and instigated ‘kar sevaks’ to demolish the 16th century mosque. However, the accused had pleaded innocence maintaining that there is no evidence to prove their guilt and claimed they were implicated by the then Congress government at the Centre as a political vendetta.
In a significant judgment last year, the Supreme Court allotted the disputed site in Ayodhya for construction of a Ram temple, while calling the demolition of the mosque a violation of the rule of law.
An alternative five-acre site was marked in the city for building a mosque.
Before the 2017 verdict of the apex court, two sets of cases were being heard in Lucknow and Raebareli.
The trial of the first case involving unnamed ‘kar sevaks’ was going on in a Lucknow court, while the second set of cases relating to the eight VVIPs, including Advani, Joshi, Vishnu Hari Dalmiya, Singhal, Katiyar, Bharti, Giriraj Kishore and Sadhvi Ritambhara, were going on in a Raebareli court.
The apex court, had while restoring the charge of criminal conspiracy, directed clubbing of two cases relating to the demolition and had also ordered that the trial be concluded in two years. (PTI)