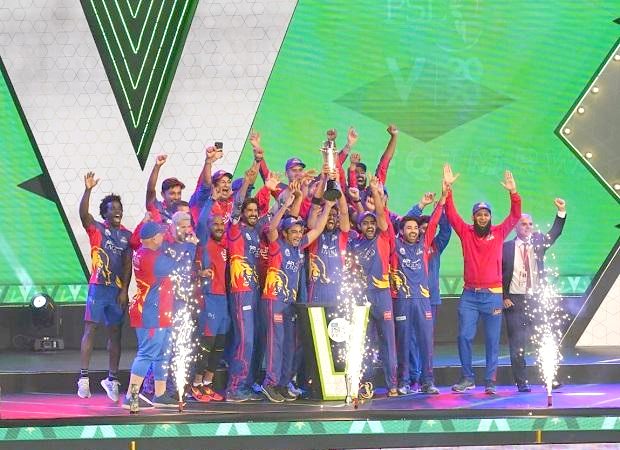 Karachi Kings officials and players pose with the winning trophy after the final of the PSL T20 cricket match against Lahore Qalandars at National Stadium in Karachi. (Photo | AP)

Karachi, November 18: An unbeaten half-century by Babar Azam anchored Karachi Kings to their maiden Pakistan Super League title after beating Lahore Qalandars by five wickets in the final.
Azam’s 63 not out off 49 balls propelled Karachi to 135-5 with eight balls to spare.
Lahore misread the slow pitch and labored to 134-7.
Azam finished the tournament, which resumed on Saturday after being suspended for eight months by the pandemic, as the leading run-scorer with 473. He gauged the pitch in the final to perfection, hitting seven boundaries.
Azam raised his half-century with back to back boundaries against Pakistan’s premier pace bowler, Shaheen Afridi, and captain Imad Wasim hit the winning runs, a boundary through the covers against the left-arm fast bowler in the penultimate over.
Chadwick Walton, who made 22, combined with Azam for 61 from 50 balls for the third wicket.
Earlier, Lahore’s lineup packed with power-hitters stuttered against Karachi’s all-Pakistan bowling attack after Umaid Asif was picked ahead of South African left-arm fast bowler Wayne Parnell.
Tamim Iqbal (35) and Fakhar Zaman (27) opened with 68 but consumed half of the overs.
Asif removed both openers within four balls and, when Mohammad Hafeez holed out, Lahore lost three wickets in the space of two runs.
In the death overs, Samit Patel and Ben Dunk fell to false strokes against medium pacer Arshad Iqbal, 2-26. Fast bowler Waqar Maqsood capped a brilliant bowling performance by Karachi when he had two wickets in the penultimate over. Lahore let 52 balls go for dots in its first final. (AP)