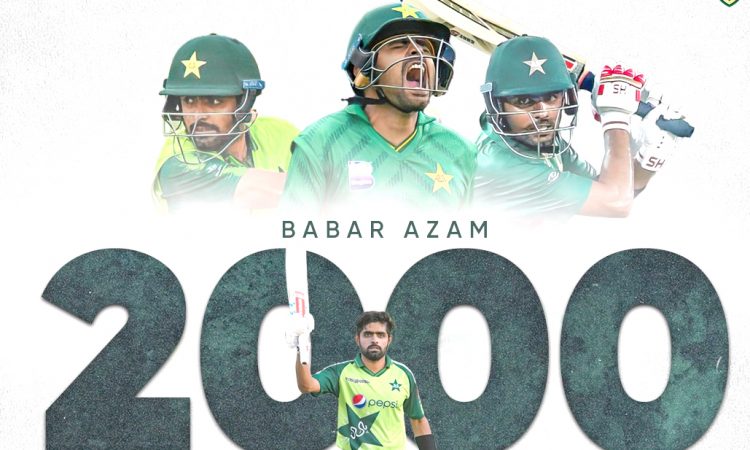 HARARE (Zimbabwe), April 25: Pakistan skipper Babar Azam on Sunday added another feather to his highly illustrious cap as he became the fastest batsman to reach 2,000 runs in T20I format.

Babar achieved the feat in the third and final T20I against Zimbabwe at the Harare Sports Club. The Pakistan skipper has taken 52 innings to score 2000 T20I runs, four less than India’s Virat Kohli who had taken 56 innings to reach the landmark.
Australian skipper Aaron Finch (62 innings) and former New Zealand captain Brendon McCullum (66 innings) are at third and fourth place respectively.
While Kohli is still leading the charts of most runs in T20I cricket, Babar is at 11th spot having scored 2035 runs in the shortest format of the game. The Indian skipper has scored 3,159 T20I runs at an average of 52.65.
Earlier this week, Kohli remained firm at the fifth spot but Babar advanced one place to reach the second position in the ICC T20I player rankings released on Wednesday.
Babar’s superlative form had helped him replace Kohli at the top of the men’s ODI player rankings last week and this week’s T20I update saw him make a strong 47-point surge to overtake Finch in the T20I rankings.
Rizwan stars as Pakistan beat Zimbabwe by 24 runs to win T20 series

Mohammad Rizwan struck 91 off 60 balls as Pakistan defeated Zimbabwe by 24 runs Sunday to win a Twenty20 international series 2-1 at Harare Sports Club.
The opening batsman had mixed fortunes in the series, posting an unbeaten 82 in the first match but making only 13 in the second.
Pakistan captain Babar Azam won the toss, opted to bat and the tourists made 165-3 in 20 overs as they sought redemption after a shock 19-run second match loss.
The batting of Rizwan and Azam (52) and the bowling of recalled Hasan Ali (4-18) ensured Pakistan would not suffer the humiliation of losing twice to minnows Zimbabwe within three days.
Zimbabwe made a bold bid for victory, though, reaching 101 for one after 13 overs before being undone by the loss of three wickets within 15 balls for the addition of just eight runs.
As the Pakistan bowlers tightened their grip, only Brendan Taylor (20) made a meaningful score and the hosts finished on 141-7.
It was the second successive T20 series success for the tourists after beating South Africa 3-1 before travelling to Harare.
Rizwan cracked three sixes and five fours as Pakistan exceeded the expectations of Azam, who believed it would be a challenge to surpass 140 on what he considered a bowler-friendly pitch.
After the loss of Sharjeel Khan for 18 off the last ball of the fourth over, Rizwan and Azam put on 126 runs for the second wicket before the captain was out for 52 in the final over.
Medium pacer Luke Jongwe, the star of the shock Zimbabwe victory, was once again the most impressive bowler, taking the three wickets while conceding 37 runs.
Needing to score at a rate of 8.3 runs an over to overtake Pakistan and achieve a historic first bilateral T20 series victory, Zimbabwe began promisingly.
Unperturbed by the loss of Tarisai Musakanda for 10, fellow opener Wesley Madhevere and Tadiwanashe Marumani speedily put on 65 runs in a second-wicket stand.
But when Marumani (35) was bowled by Mohammad Hasnain, Pakistan took control and Madhevere (59) and Regis Chakabva (0) soon followed to the change room.
Ali excelled among the Pakistan bowlers, and Haris Rauf (2-34) atoned for a costly earlier spell by capturing two wickets in the final over.

The T20 series will be followed by two Tests, also in Harare, beginning on April 29 and May 7. (ANI/AFP)