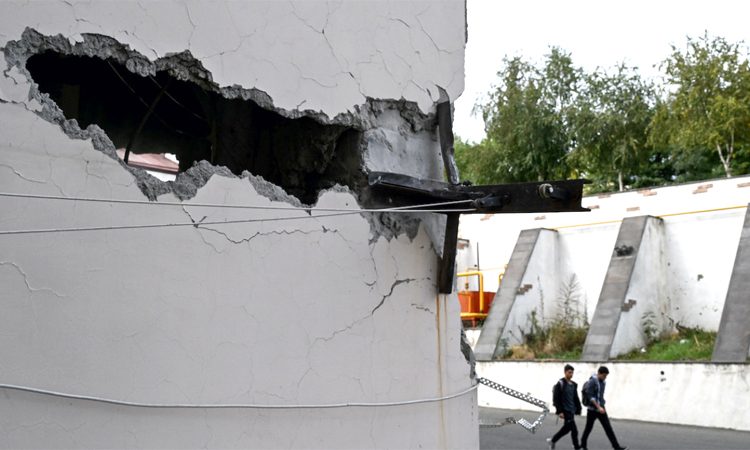 Two men walk past an apartment building damaged by shelling in the breakaway Nagorno-Karabakh region’s main city of Stepanakert on Oct. 2.

YEREVAN, October 2: Azerbaijani forces on Friday struck Stepanakert, the main city in Azerbaijan’s breakaway Nagorny Karabakh region, wounding “many” people, an Armenian official said as fighting raged for a sixth day.
The Caucasus neighbours have been locked in a simmering conflict for decades over the region and new fighting that erupted on Sunday has been the heaviest in decades.
“There are many wounded among (Stepanakert’s) civilian population, civilian infrastructure is damaged,” defence ministry spokesman Artsrun Hovhannisyan said on Facebook without providing further details.
AFP journalists on the ground heard several explosions in the city as civil defence sirens sounded.
The separatist government in Stepanakert said Azerbaijani forces destroyed a bridge linking Armenia to Karabakh.
Both sides accused each other of initiating the recent hostilities and have rejected a possibility of peace talks.
In a joint appeal on Thursday, Russian President Vladimir Putin, US President Donald Trump and French President Emmanuel Macron urged the two sides to return to negotiations aimed at resolving the longstanding dispute.
Armenia’s foreign ministry said on Friday that Yerevan “stands ready to engage” with France, Russia, and the United states — which co-chair the OSCE group of mediators to the conflict- “to re-establish a ceasefire regime.”
Nearly 200 people have been confirmed killed since Sunday, including more than 30 civilians, and there are fears of the fighting expanding into an allout, multi-front war that could suck in regional powers Turkey and Russia.
Armenia and Karabakh declared martial law and military mobilisation Sunday, while Azerbaijan imposed military rule and a curfew in large cities.
Talks to resolve the conflict have largely stalled since a 1994 ceasefire agreement. (AFP)