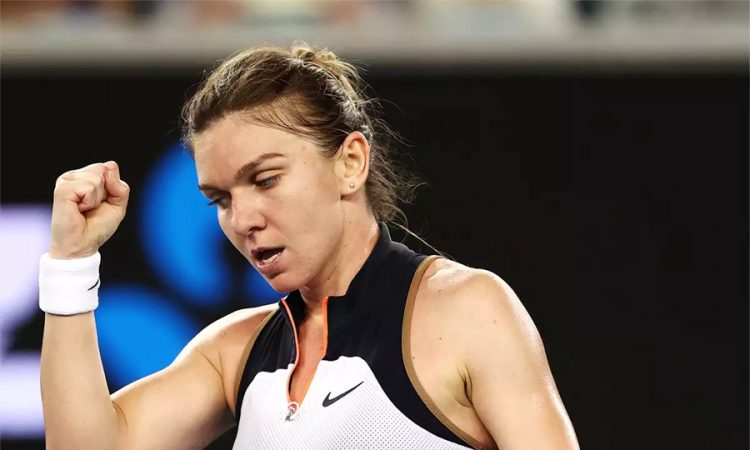 Melbourne, February 10: Iga Swiatek’s dress, wrap skirt and fitted bodice, mint green with plum detailing, was salad fresh. It had structure and flow. Not unlike the Pol’s play. On a day when the Australian Open schedule threatened to run skelter, Swiatek, the reigning queen of Roland Garros, gave it balance.

Simona Halep lived dangerously against the inspired Aussie Ajla Tomljanovic, flirting with the dark side at a time when she wasn’t reading her opponent like a beach novel. The second seed trailed by a set, and in the decider she fell back 0-2 and then 2-5 before winning five straight games for a 4-6, 6-4, 7-5 result.
Novak Djokovic dropped a set and the seismic index around Melbourne Park pointed at six. The world No.1 wasn’t feeling the ball and looked out of breath, but he picked himself up in time to score a 6-3, 6-7 (3), 7-6 (2), 6-3 win against the battling American Frances Tiafoe.
The day began with the eighth seed in the women’s draw Bianca Andreescu falling 3-6, 2-6 to the magic of the 71st-ranked Su-Wei Hsieh, whose ability to stretch the court with her two-handed ware, saw the Canadian reduced to a spectator for most part. Two-time Wimbledon champion Petra Kvitova followed not long after, the ninth seed was beaten 4-6, 6-1, 1-6 by Romania’s Sorana Cirstea, who was among the 72 players in hard quarantine.
“Playing two hours in 30 degrees takes a bit more out of me than normal,” a delighted Cirstea said. “I think it’s impressive to come out of 15 days without hitting a ball and competing like I did today.”
Stan Wawrinka, the 17th seed in the men’s draw, the champion in 2014, went down to Hungary’s Marton Fucsovics 5-7, 1-6, 6-4, 6-2, 6-7 (9-11) in just under four-hours. The Swiss, who came back from two-sets down and led 6-1 and then 9-6 in the super-tiebreak that decided the match, couldn’t close it out against a man who refused to walk away. (Agencies)