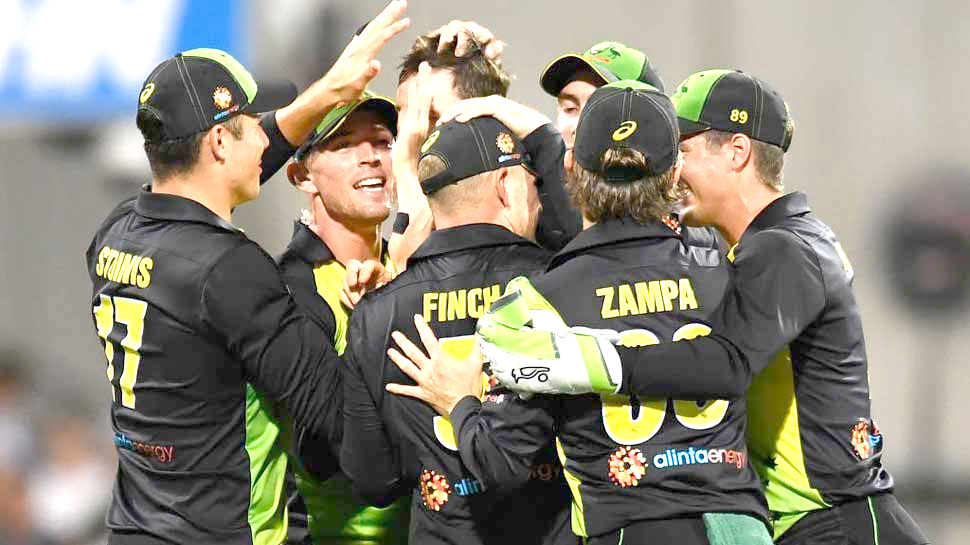 BRISBANE, November 21: A sloppy India failed to get an ideal start to the Australia tour, losing the rain-hit opening T20 International by four runs at the Gabba on Wednesday.
India first faltered in the field, letting Australia score 158 for four after rain shortened the contest to 17 overs a side. Glenn Maxwell was the star batsman for Australia, hammering 46 runs off 24 balls.
The 45-minute rain stoppage meant India were set a revised target of 174 runs in 17 overs.
Opener Shikhar Dhawan smashed a sublime 76 off 42 balls in the run chase before Dinesh Karthik came up with a pulsating 30 off 13 balls towards the end but India still finished agonisingly short on 169 for seven.
It was a morale boosting win for Australia, who have endured a dismal run of late in limited overs cricket.
The second match of the three-match series will be played in Melbourne on Friday.
Dhawan got India off to a quick start, putting on 35 off 25 balls for the opening stand with Rohit Sharma (7).
The latter was caught at long on off Jason Behrendorff (1-43) in a bid to accelerate his strike-rate. In keeping with the strategy used during the T20I series in England, KL Rahul (13) came out to bat at number three.
Dhawan and Rahul put on 46 runs for the second wicket, but it was mostly down to the left-hander’s belligerence. He hit ten fours and two sixes overall, and reached his ninth T20I half-century off only 28 balls.
Rahul though was patchy at best and struggled for timing. He was stumped off Adam Zampa (2-22) in the ninth over, with the leg spinner also accounting for skipper Virat Kohli (4) who never really got going coming down at number four.
Zampa should have had a third wicket but he dropped a return chance from Dhawan (on 65). The batsman enjoyed another life at 74, when substitute Nathan Coulter-Nile put him down at square leg off Billy Stanlake (1-27).
The asking rate was climbing up and it took a toll on Dhawan, who finally holed out of Stanlake, leaving Rishabh Pant (20 off 15 balls) and Karthik with a mountain to climb.
They nearly achieved the impossible, putting on 51 off a mere 24 balls, toying around with the Australian bowling. But what is becoming increasingly frustrating with Pant, he played yet another loose and unnecessary stroke, throwing his wicket away.
It left Karthik to finish off things, but he found the going tough without enough support from the other end. With 13 needed off 6 balls, Krunal Pandya (2) and Karthik holed out on consecutive deliveries off Marcus Stoinis (2-27).
Dhawan edges Kohli in most T20I runs in a year
Shikhar Dhawan’s 76 in India’s tour-opening first T20I against Australia at The Gabba on Wednesday may have been in vain, but it perched the opener on top of the charts for batsmen with most T20I runs in a calendar year — leaving behind his captain and team-mate Virat Kohli.
It took Dhawan’s tally to 646 T20I runs in 2018, going past Kohli’s 641 that he scored in 2016. At third place is Pakistan’s Fakhar Zaman with 576 runs this year, followed by Rohit Sharma with 567 runs in 2018.
646 – Shikhar Dhawan (2018)
641 – V Kohli (2016) (PTI)