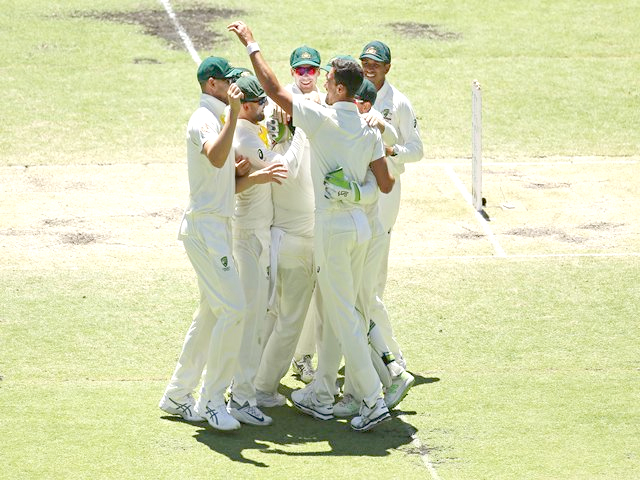 PERTH, December 18: India crumbled in the face of Australia’s remarkable metamorphosis and crashed to a 146-run defeat in the second Test on Tuesday, surrendering a rare hard-earned ascendancy in a series Down Under.
The hosts levelled the four-match series 1-1 after India were bowled out for 140 runs in 56 overs in their second innings on the fifth and final day.
Starting from overnight 112 for five, India lost their last five wickets for 28 runs and it was all over within 65 minutes of play.
This was Australia’s first Test win since the ball-tampering scandal broke out in South Africa earlier this year.
Having won the opening game by 31 runs to go in front a week ago, India had been talked up as a threat coming into the capital of Western Australia, but they wilted as the pace-spin duo of Mitchell Starc and Nathan Lyon worked in tandem at the Optus Stadium.
Starc (3-46) and Lyon (3-39) finished with three wickets apiece, while Josh Hazlewood (2-24) and Pat Cummins (2-25) took a brace each.
While Starc and his pace colleagues were expected to thrive on the lively track, it was off-spinner Lyon’s exceptional outing that gave Australia the edge. He finished the match with eight wickets, including a five-for in the first innings and a deserving Man-of-the-Match award.
India surely missed a trick in not playing a specialist spinner, something that was admitted by one of their own at the end of fourth day’s play.
Hanuma Vihari (28) and Rishabh Pant (30) had continued their overnight partnership, and batted out only six overs before the first wicket fell on this day. Overall, they added 21 runs for the sixth wicket.
Vihari was the first to go, lobbing a catch off Starc to short point. Pant then tried to play a few more attacking strokes, but he didn’t comprehend the situation well and was confused whether to farm the strike at all.
In doing so, he attacked Lyon and holed out to mid on, with Peter Handscomb taking a low diving catch.
It hastened the end for India, with Umesh Yadav (2) returning a simple catch to Starc.
Ishant Sharma (0) was caught behind off Cummins, and Jasprit Bumrah (0) hit a skier for another return catch to the pacer as Australia sealed their first Test win since Durban before the ball-tampering scandal hit the headlines.
Australia had scored 326 runs in their first innings, and India replied with 283 runs, thanks to Virat Kohli’s 25th Test hundred, thus conceding a lead of 43 runs. The hosts scored 243 runs in their second innings to post a 287-run target. (PTI)