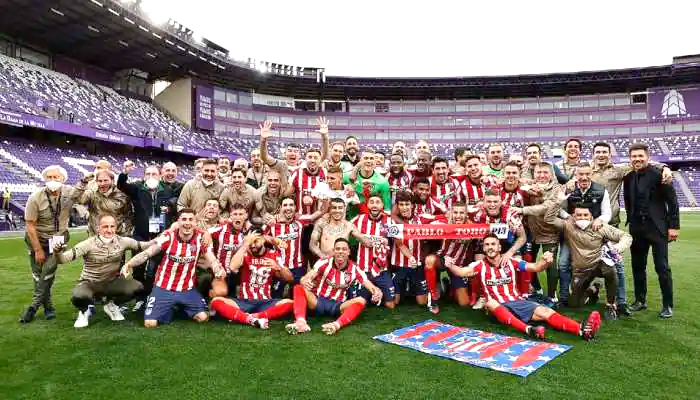 Atletico Madrid players celebrate at the end of Spanish La Liga final match against Valladolid, in Valladolid on May 22, 2021. | Photo Credit: AP

VALLADOLID (Spain), May 23: Atletico Madrid pipped city rivals Real Madrid to the La Liga title on Saturday after Luis Suarez fired them to a 2-1 comeback win at Real Valladolid.

Valladolid took a shock lead in the 18th minute when Oscar Plano slotted past Jan Oblak to complete a sweeping counterattack after Yannick Carrasco had lost control of the ball following an Atletico corner.
Just as they had done in last week’s comeback win over Osasuna, Atletico missed a series of clear opportunities but they drew level after a moment of magic from Angel Correa, who danced his way through the defence before arrowing into the bottom corner in the 57th minute.
Suarez then pounced on a giveaway by the Valladolid defence to score in the 67th and put Atletico on their way to a victory that would secure the title no matter what happened in Real Madrid’s game at home to Villarreal.
Atletico finished top of the standings on 86 points while Real, who snatched a late 2-1 win over Villarreal, came second on 84. Valladolid finished 19th and were relegated to Spain’s second division.
Teenage Atletico Madrid fan dies in title celebration tragedy
A 14-year-old boy died on Saturday during celebrations of Atletico Madrid’s La Liga title victory in the Spanish capital, emergency services told AFP.
The incident happened as the teenager was in a van with friends.
He is believed to have suffered a brain injury after hitting his head against the wall of an underground car park.
Emergency services workers attempted to resuscitate the teenager for an hour.
At the time of the accident, more than 2,000 Atletico supporters were celebrating their side’s 11th league title win around Neptune Fountain.
Atletico have traditionally celebrated victories in the monument but authorities had banned all public gatherings due to Covid-19 restrictions.
“It’s a little strange for a celebration… We’ve not been able to celebrate like usual, in the stadium, surrounded by all the fans,” 22-year-old Atleti fan Pablo Diaz told AFP.

“We will celebrate it with a bit of worry, by paying attention, with the mask on,” he added.
The club have organised a parade at 1800 local time (1600GMT) on Sunday in line with coronavirus regulations. (Reuters/AFP)