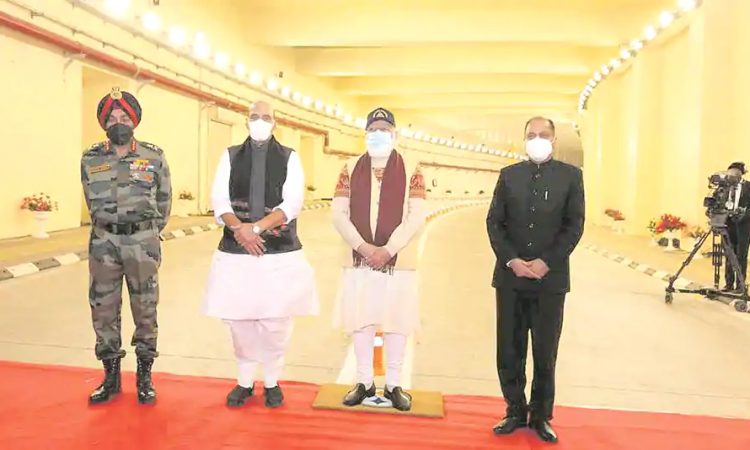 New Delhi, October 4: After inaugurating the 9.2-km Atal Tunnel on Saturday, Prime Minister Narendra Modi asked the Border Roads Organisation (BRO) chief Lieutenant General Harpal Singh to start preparing for the underground tunnel at Shinku-La so that an all-weather road is completed to Ladakh via Darcha-Padam-Nimu route in next three years.
PM Modi apparently had a detailed discussion with the BRO chief at the Atal Tunnel site and told him that road infrastructure on the border areas must be speeded up so that Indian troops can patrol up to the last point. At one point, Gen Harpal Singh told PM that road construction in India is a classic example of “Atmanirbhar Bharat” as not even a single foreigner has helped BRO in construction since the March 2020 lockdown due to the coronavirus pandemic.
While the PM wanted to know in details about the Seri nullah ingress that held up the Atal Tunnel project, he heard the full brief on the Darcha-Padam-Nimu axis. Already 100km of this road has been metalled with another 200km to be completed in the next three years along with a 4.5km tunnel under the over 16,000 feet high Shinku Pass. BRO has decided to validate the new axis this winter by keeping it snow-free for the army’s logistics movement. PM Modi inspected the entire 9.2km of Atal tunnel through open jeep twice and got down in between to understand each and every point.
It is understood that Singh told the Prime Minister that the Sela Tunnel en-route to strategic Tawang will be completed in the next three years. The tunnel foundation was laid by PM Modi on February 10, 2019. The Rs 687 crore project involves a fresh cut of 12km road as well as a three-kilometre tunnel under the Se La, which saw action with the Chinese People’s Liberation Army (PLA) in 1962 war.
While the Prime Minister was briefed about Darcha-Nimu road and Se La tunnel, BRO is making plans to cut across through glaciated Saser La in Siachen sector to link up with Murgo-Daulet Beg Oldi axis so that neither China nor Pakistan can threaten supplies to the last post at the Karakoram Pass. (Courtesy: HT)