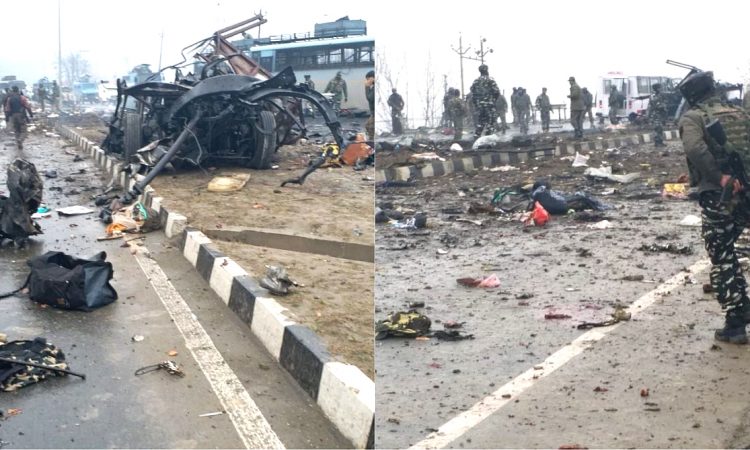 Srinagar, February 14: At least 40 CRPF personnel were killed on Thursday when a convoy in which they were travelling was attacked by a Jaish-e-Mohammed (JeM) suicide bomber, who rammed his explosives-laden vehicle into one of the convoy’s buses near Pulwama on the Srinagar-Jammu highway.
“One of the vehicles of the convoy was targeted,” said the CRPF’s Inspector General (Operations) Zulfiqar Hassan. “It inflicted damage both on vehicles as well as our men,” he added.
The bombing in Pulwama’s Lethpora area also left at least four troops injured and was the deadliest attack in terms of casualties in the last three decades of militancy in the State.
In a post on Twitter, Home Minister Rajnath Singh blamed the “Pakistan-based, Pakistan-backed” JeM for the “dastardly” attack.
The injured were shifted to the Army’s 92 Base Hospital in Srinagar, where 40 jawans were either declared dead or succumbed to their injures, an official said.
A security official, who spoke on condition of anonymity, said that at about 3:15 p.m. a sport utility vehicle (SUV) laden with 300 to 350 kilograms of explosives rammed into a CRPF convoy of about 70 vehicles that was on the way to Srinagar from Jammu, as the highway had opened after a week-long closure due to snowfall.
About 2,500 personnel were travelling to the Valley at the time of the attack. Gunshots also followed the blast, according to locals. The personnel under attack belonged to 92, 17 and 54 Battalions of the CRPF.
“Preliminary inputs suggest that it was a remote-controlled detonation with a group of militants overseeing the operation,” said a senior police officer, who declined to be identified.
The explosion was so powerful that it was felt in Srinagar, about 30 km away away. Two vehicles, including the one carrying the bomber, were blown into smithereens. Eyewitnesses said only the charred skeletal frames of the vehicles hit by the blast were seen on the roadside, while several buses in the convoy sustained severe damage.
The militant attack raises questions over security on the national highway, which is patrolled by three security agencies including the local police, CRPF and Army on a daily basis.
JeM claims responsibility
Immediately after the attack, the JeM claimed responsibility and released a picture of its local operative who had carried out the attack. He was identified as Adil Ahmad Dar alias ‘Waqas Commando’, a resident of Pulwama’s Kakapora. According to the police, Dar joined the outfit in 2018 and was a Class 10 dropout.
“The nature of explosive is a matter of investigation,” said Inspector General of Police S.P. Pani. “We are carrying out a post-blast investigation to verify the circumstances,” he added.
In 2001, 38 people were killed when a three-member JeM squad blew up a car outside J&K’s Legislative Assembly. The toll in Thursday’s attack exceeded the fatalities inflicted by militants in Uri, in 2016, when 19 armymen were killed near the Line of Control.
The JeM carried out its first-ever car bombing in Kashmir in 1999, outside the Badamibagh Cantonment.
Sacrifices of our security personnel will not go in vain: PM
Prime Minister Narendra Modi termed the attack despicable and asserted that the sacrifices of security personnel would not go in vain.
He also spoke with Home Minister Rajnath Singh and other top officials in the wake of the attack.
“Attack on CRPF personnel in Pulwama is despicable. I strongly condemn this dastardly attack. The sacrifices of our brave security personnel shall not go in vain,” he tweeted.
He said the entire nation stood shoulder to shoulder with the families of those killed. He also wished speedy recovery of those injured.
“Spoke to Home Minister Rajnath Singh Ji and other top officials regarding the situation in the wake of the attack in Pulwama,” he said. (Agencies)