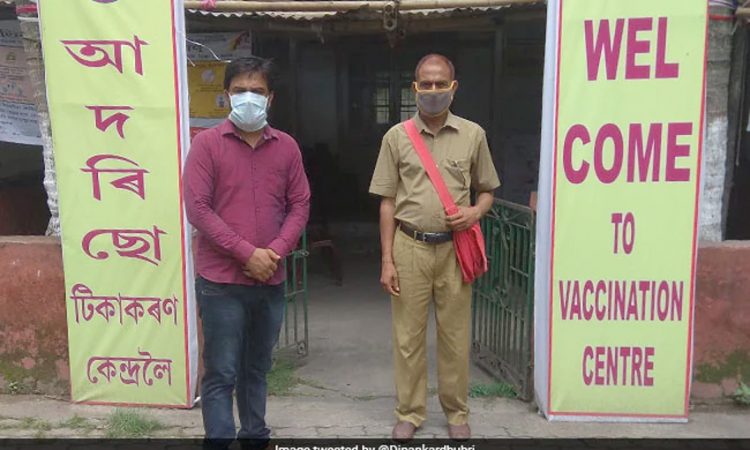 Dhubri, June 15: With the Centre and the state having stepped up the COVID-19 vaccination drive, a 36-year- old man in Assam’s Dhubri district has taken it upon himself to convince people, especially those from the underprivileged sections, about the efficacy of the jabs amid reports that many were hesitant to get themselves inoculated.

Stating that he has taken a pledge to free Dhubri of coronavirus, Dipankar Mazumder, a medical representative by profession, is moving from one door to another on his motorcycle trying to bust all myths surrounding the available COVID-19 vaccines.
Mazumder, popularly known as the ‘vaccine man’, told PTI that he has so far succeeded in persuading 80 people to visit nearby inoculation centres.
“There are some people who still do not own a smartphone and have no clue about the vaccination process.
Many of them are scared of taking the vaccine either due to lack of awareness or because of the misinformation doing the rounds,” he said.
Currently, Mazumder has directed his attention to daily wage earners, especially women and senior citizens, as “they are among the most vulnerable groups of people” that could get infected.
“Initially, it was a huge challenge counselling locals who were reluctant to take the dose as rumours were being spread over its after-effects. Now, however, they have understood the seriousness of the drive, and some are even coming forward on their own,” he explained.

Mazumder’s selfless service has earned him appreciation from townsfolk and district officials.
Lauding his efforts, Dhubri Additional Deputy Commissioner Dhrubajyoti Das insisted that the 36-year-old should coordinate with the administration and collect relevant data to maximise the success of the initiative.(PTI)