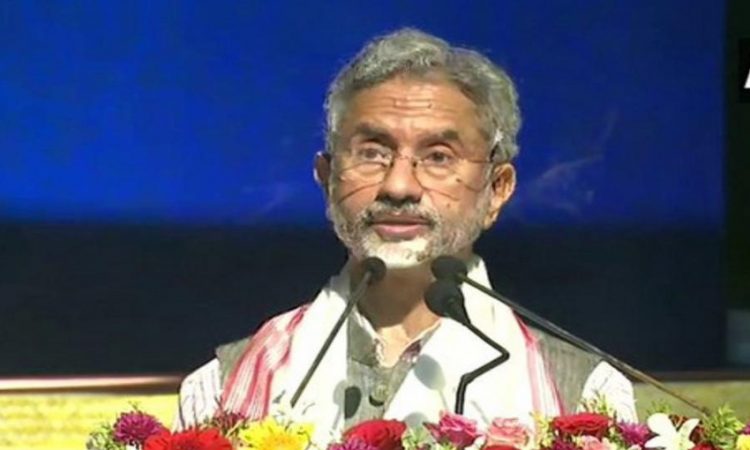 Guwahati, February 15: External Affairs Minister S Jaishankar on Monday said, Assam is the springboard of India’s Act East Policy and for making it successful and attracting investments, there is need for all-round development of the state.

The minister, accompanied by Japanese Ambassador to India Satoshi Suzuki, was here to review JICA-assisted projects in the northeastern state.
Addressing a press conference, Jaishankar said, Prime Minister Narendra Modi is deeply committed to the development of Assam, and Japan International Cooperation Agency (JICA)- aided projects in the state are examples of how international policies and partnerships can contribute to the development of states.
“The Modi government’s deep commitment for the progress and welfare of Assam can be seen in the various projects that are being implemented and changes that happened in the last six years,” he said.
Noting that his visit to the state was “very much a part of this trend”, he expressed hope that many of the projects would fructify.
“One way, Assam can bring in more investments will be to build better infrastructure to which the Union government is committed, and specifically how to appeal to businesses of a particular country,” he said.
After visiting the Guwahati drinking water supply project with the envoy, Jaishankar said that this was an important project being implemented in the state with Japanese assistance.
“We want to cite this as an example of how foreign policies can make a difference in the lives of ordinary people of a country,” the minister said.
JICA’s footprint in the state would be roughly between Rs 9,000 to Rs 10,000 crore, including bridges, roads, water supply, sewerage, health and agriculture projects, he said.
Referring to Japanese investments in the state, the minister said that human resources must respond to Japanese companies in an environment where they are comfortable, and “we need more sessions with these companies to highlight the plus points of the state”.
Jaishankar requested the envoy to respond to a question at the press conference regarding investments by his country in the northeastern state, to which he replied that his government can give assistance to create necessary infrastructure but for that “Japanese companies will have to choose Assam for their investment”.
“There should be healthy competition among different states and Japanese businessmen must know the state better.
There are already many young entrepreneurs of our country who know the potential of this state”, he added.
Referring to the Kaladan Multi-Modal Transit Transport Project, he said that the Sittwe port is operational but there are logistical challenges with the navigability part proving to be more difficult than what the surveys had indicated.
There were law and order challenges in the areas bordering Mizoram but “it is in the last stage and we expect to push it through soon”, he said.
The Kaladan project when completed will connect Kolkata with Sittwe seaport in Myanmar.

Asked about the impact of political developments in neighbouring Myanmar, which is an important component of the Act East Policy, he said, “these are early days and hopefully development projects will not be affected”.
On India’s role regarding COVID-19 vaccine in the international arena, Jaishankar said that the country is among the largest producers of the vaccine in the world with two indigenous vaccines being supplied to around 20 to 25 nations.
“We have been providing vaccines to our neighbouring countries, Caribbeans, Indo-Pacific nations on a grant basis as a goodwill gesture but commercial sales are also happening”, he said.
Roughly 75 countries have asked or signed contracts with vaccine producers and “our prime minister has made it clear that we will look after our people but we are also there for the world”, the external affairs minister said. (PTI)