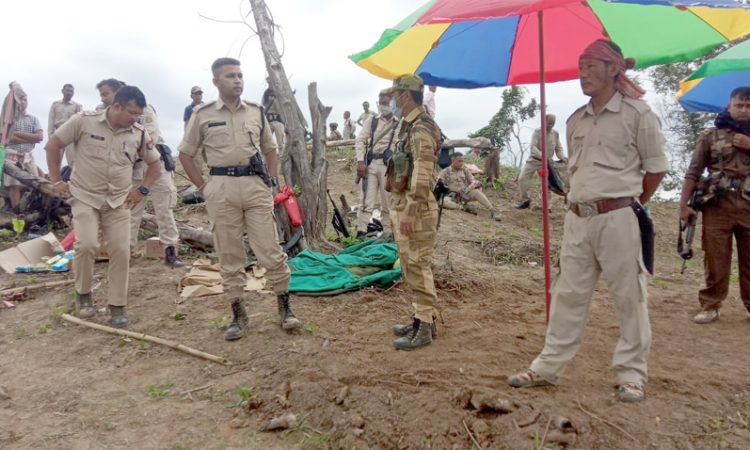 KOHIMA, JUNE 29: The video of an incident involving a verbal confrontation between personnel of Nagaland Police and Assam Police that went viral on Thursday, happened at Dissoi Valley after the Assam Police came to the disputed site, informed SP Mokokchung.

The disputed site at the Assam-Nagaland border belt was in the news recently following the ‘visit’ of former Mariani MLA Rupyoti there.
The SP said that 50 personnel of Assam Police, led by Additional SP, Jorhat, along with 30 Home Guards personnel and some Assam Forest Department officials came to the disputed site without informing their Nagaland counterparts, on the premise that they had received reports from TV channels and NGOs based in Assam of some construction works taking place at the disputed site.
He also said that the Assam Police, after “not finding much”, had informed that they will go back but did not leave till afternoon.
“An inquiry was made by both the DC Office and the Superintendent of Police, Mokokchung, to which the Assam side said that as per instructions, they are to carry out intensive patrolling in the area and since they were not able to complete the whole task today itself, they were pitching up temporary tents for patrolling purposes”, he added.
“At present, they (Assam Police) have pitched some tents, and went patrolling”, informed SP Mokokchung.
Stating that they have expressed their displeasure to the concerned authority by saying that they could have been informed in advance, SP Mokokchung maintained that the whole incident could have been done in a very systematic manner, rather than unilaterally.
“We have also told them that we want to de-escalate the whole situation and requested that the forces from their side withdraw. There is no need for any confusion and if needed, they can inform us anytime and we can jointly go and look at the site”, he said.
Around 8 Nagaland Police personnel were present at the site even before the incident to ensure that no untoward situation would occur after the last border incident where former Mariani MLA Rupjyoti Kurmi came to the disputed site and created some issues, he said.
“Post that incident, we have kept some of our boys so that there is no confusion in the area”, SP Mokokchung added.
Meanwhile, a member of Tzurangkong Range Naga Youth Front (TRNYF) told Nagaland Page that the incident occurred at Vikoto village, which falls under Tzurangkong Range in Mokokchung district.

“We heard that more than 100 Assam police personnel had come to the new farm at Vikoto village. So around 100 members of TRNYF also went there but by the time we reached, the Border Magistrates were already there. After discussion, we told them that we’ll withdraw from the place once the Assam Police personnel go back”, he said.
In response, the Assam Police personnel reportedly said that they will leave only after the respective Deputy Commissioners of Mokokchung and Jorhat holds their meeting, which had been left pending for almost a month due to the pandemic situation.
“They did not withdraw saying they were Forest Protection Force. We have spoken to DC, Mokokchung, and were told that the DC-level meeting will be held in a day or two. But due to the pandemic, they will do video conference only”, he informed.
This development was relayed to the Assam Police personnel stationed at the disputed site but they refused to withdraw as they have not received similar communication from Jorhat DC, the TRNYF member added.
(Page News Service)