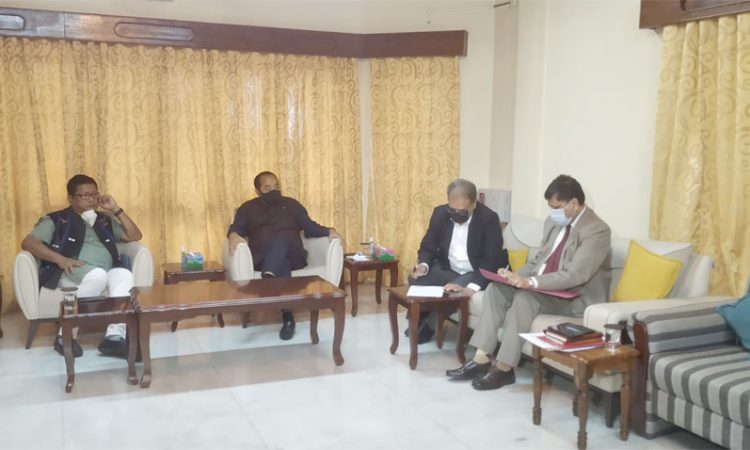 Simultaneous withdrawal of SF at 2 locations

DIMAPUR, JULY 31: In a significant development, Assam and Nagaland have agreed to withdraw their police forces from Dessoi Valley Reserved Forest/Tsurangkong Valley in Mokokchung district of Nagaland within 24 hours.

This was agreed during a meeting held between Chief Secretary of Nagaland, J Alam, and Chief Secretary of Assam, Jishnu Baruah in the presence of Nagaland Deputy Chief Minister Y Patton and Assam’s Education Minister Ranoj Pegu, held at Police Guest House, Dimapur, with the view to de-escalate the tense situation prevailing in the two locations at the Dessoi Valley Reserved Forest/Tsurangkong valley due to the standoff between the armed police forces of Nagaland and Assam.
Both sides agreed that to maintain peace and tranquility in the areas around Ao Senden Village and Vikuto Village, as they are known in Nagaland, and known as Jankhona Nala/Nagajankha and Compartment No.12 respectively in Assam, urgent and effective steps are required to diffuse the stand-off between the security forces of Nagaland and Assam.
In this regard, it was decided by both sides that security personnel of both States should simultaneously move back from their present locations to their respective base camps.

“The simultaneous withdrawal of the security personnel would begin immediately and shall be completed in the next 24 hours as far as possible”, a statement signed by Nagaland Chief Secretary J Alam and Assam Chief Secretary Jishnu Barua, in the presence of Dy CM of Nagaland Y Patton and Assam’s Minister of Education, Welfare of Plain Tribe & Backward Classes (non-BTC) Ranoj Pegu, stated.
They also decided that Nagaland and Assam shall monitor the area by surveillance using UAV and satellite imagery with a view to maintaining the status quo.
The Superintendents of Police of Mokokchung district (Nagaland) and Jorhat (Assam) would ensure withdrawal of their respective forces and shall be responsible for it in the instant case, the statement said.
Interacting with media persons after the meeting, Y Patton said that the agreement was the result of the interactions that the two Chief Ministers (Assam & Nagaland) had with Union Home Minister Amit Shah on July 24 and 25 and agreed in principle, especially in the two locations, to simultaneously withdraw forces from there.
He mentioned that while the issues of the two locations have been taken up for now, the other locations will be discussed subsequently. He also requested Assam’s Education Minister, Ranoj Pegu during the meeting to look into the issues of Nagas being harassed at the check gates as well as discussed the lifting of curfew at Sibsagar area citing that it is causing difficulty to the people of Nagaland.

On travelers from Nagaland facing problems while crossing into the neighbouring State, Patton said Assam Government has agreed not to stop or check commuters from Nagaland.
Pegu told media persons that he would discuss the issues raised by the Dy CM with Assam’s CM Himanta Biswa Sarma and assured that the Government of Assam will take care of any matter that the people of Nagaland might face at the borders.
Expressing gratitude towards the “statesmanship” of the two Chief Ministers as well as Union Home Minister Amit Shah, Pegu said that the two States have come to an understanding and will try to maintain status quo. He added that despite the long pending border issues between the States, people and Governments have maintained peace and tranquility and these cordial relationships between people and the States should remain.
He stated that despite being different States, both are parts of the same country and such harassments cannot be there and refused to draw parallels between the Assam-Mizoram issue and Assam-Nagaland issue, Pegu stated that these two cannot be equated and refrained to comment further.
Meanwhile, Assam Chief Minister Himanta Biswa Sarma said that in a major breakthrough towards de-escalating tensions at Assam-Nagaland border, the two Chief Secretaries have arrived at an understanding to immediately withdraw States’ forces from border locations to their respective base camps.

“This is a historic step in our relations. My gratitude to Nagaland Chief Minister Neiphiu_Rio for working with Assam in restoring peace at the border”, Sarma tweeted.
Assam is committed to ensuring peace along all its borders and strives for social and economic prosperity of Northeast region, he added.
Assam’s longest border dispute is with Nagaland, which began since the creation of the state in 1963.
(Page News Service/PTI)