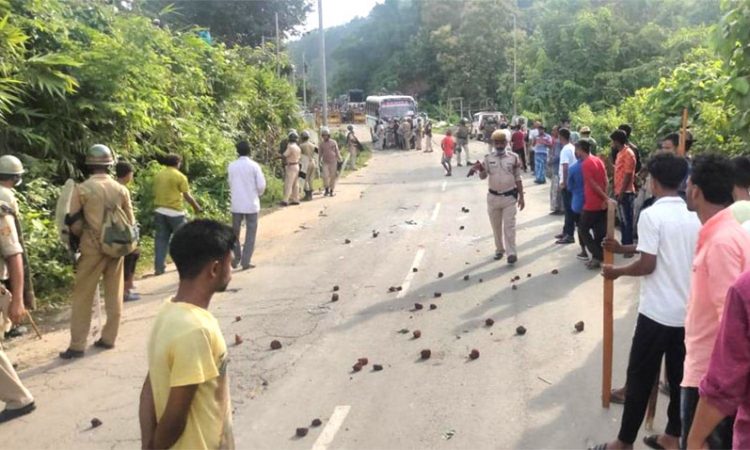 GUWAHATI/AIZAWL, JULY 26: At least 6 Assam police personnel were killed and 60 others, including an SP, were injured in a sudden escalation of the border dispute between Assam and Mizoram that also saw the two Chief Ministers engaging in a public spat as they blamed each other’s police for the violence and sought the Centre’s intervention.

Union Home Minister Amit Shah spoke to the Chief Ministers of Assam and Mizoram, Himanta Biswa Sarma and Zoramthanga respectively, and urged them to ensure peace along the disputed border and find an amicable settlement.
Assam’s Barak Valley districts of Cachar, Karimganj and Hailakandi share a 164 km long border with Mizoram’s 3 districts of Aizawl, Kolasib and Mamit.
Following a territorial dispute, there were clashes along the inter-state border in August 2020 and February this year.
The Assam Chief Minister announced on Twitter that 6 personnel of the Assam Police were killed in firing by “miscreants” from Mizoram along the inter-state border in the Cachar district.
“I am deeply pained to inform that 6 brave jawans of @assampolice have sacrificed their lives while defending the constitutional boundary of our State at the Assam-Mizoram border. My heartfelt condolences to the bereaved families”, Sarma tweeted.

However, Mizoram Home Minister Lalchamliana, in a statement, said Mizoram Police responded “spontaneously by firing back” at Assam Police after its 200 personnel forcibly crossed a duty post manned by the CRPF personnel and indulged in arson, assault on unarmed persons and firing.
A senior Assam Police officer, who is still inside the forest amid continuous firing from across the State border, told PTI that at least 50 personnel, including Cachar Superintendent of Police Nimbalkar Vaibhav Chandrakant, were injured in firing and stone-pelting.
The senior police officer said miscreants from across the State border suddenly started firing when civil officials of both sides were holding a dialogue to sort out the differences.
“I immediately cannot say how many people have been injured, but my guess is at least 50 personnel. Our SP was also injured in the firing and a bullet hit his leg”, the officer said over the phone.
The IPS officer spoke to PTI while he was hiding inside a forest and firing could be heard in the background.

Later in the evening, Shah spoke to the Chief Ministers of Assam and Mizoram and asked them to ensure peaceful resolution of the dispute, sources said.
During his separate telephonic conversations with Assam CM Sarma and his Mizoram counterpart Zoramthanga, Shah asked them to maintain peace along the inter-state border where tension prevails, the sources said.
The Home Minister asked the Chief Ministers to resolve the border issue mutually.
Both Chief Ministers have assured the Home Minister that the needful will be done to ensure peace and resolve the border issue amicably.
Soon after, Mizoram Home Minister Lalchamliana said in his statement that following the intervention of Shah, the Assam Police have withdrawn from the place and the duty post have been handed back to CRPF personnel.
Earlier, Zoramthanga accused the Assam Police of resorting to lathi-charge and lobbing tear gas shells while Assam Police claimed that a large number of “miscreants” from Mizoram were indulging in stone pelting and had attacked the Assam Government officials.
Mizoram Deputy Inspector-General of Police (Northern Range), Lalbiakthanga Khiangte, told PTI that at least 8 unoccupied farm huts near Aitlang stream in the trouble-torn area were torched around 11.30 p.m., on Sunday.
He said these belonged to farmers from Vairengte, the nearest border village from Assam.

Locals on the Assam side alleged that miscreants armed with sticks, rods and even rifles, attacked personnel of the Assam Police at Lailapur and damaged several vehicles, including those belonging to the office of the Deputy Commissioner.
Zoramthanga posted a video in his Twitter handle of a stand-off between Assam police personnel and a group of stick-wielding youths.
“Shri @AmitShah ji kindly look into the matter. This needs to be stopped right now. #MizoramAssamBorderTension”, he said, tagging the Prime Minister’s office and Union Home Minister’s office, Sarma and officials of Assam’s Cachar district.
Zoramthanga also alleged in another tweet that “an innocent couple” on their way back to Mizoram via Cachar was “manhandled” by “thugs and goons”.
“How are you going to justify these violent acts?” he asked.
The Assam Police countered the Mizoram Chief Minister’s allegations by saying that people from Mizoram attacked its personnel and indulged in stone-pelting on them.
“It’s unfortunate that a large number of miscreants from Mizoram are indulging in stone pelting and such forms of attack at Assam Government Officials, stationed at Lailapur to protect Assam’s land from encroachment”, it tweeted.

The Assam Police also said, “We strongly condemn these acts of vandalism and reiterate our resolve to protect Assam’s boundary.”
The Assam Chief Minister tweeted: “Honble @ZoramthangaCM ji , Kolasib (Mizoram) SP is asking us to withdraw from our post until then their civilians won’t listen nor stop violence.
“How can we run government in such circumstances? Hope you will intervene at earliest @AmitShah @PMOIndia”, he tweeted along with a video of the situation.
Later, Sarma said he has spoken to his Mizoram counterpart and reiterated that Assam Police will maintain the status quo and peace along the border.
“I have just spoken to Hon’ble Chief Minister @ZoramthangaCM ji. I have reiterated that Assam will maintain status quo and peace between the borders of our state. I have expressed my willingness to visit Aizawl and discuss these issues if need be @AmitShah @PMOIndia”, he said.
However, Zoramthanga again tweeted: “Dear Himantaji, after cordial meeting of CMs by Hon’ble Shri @amitshah ji, surprisingly 2 companies of Assam Police with civilians lathi-charged & tear-gassed civilians at Vairengte Auto Rickshaw stand inside Mizoram today. They even overrun CRPF personnel/Mizoram Police”, he claimed.
The Mizoram Chief Minister also urged Sarma to instruct the Assam Police to withdraw from Vairengte for the safety of civilians.

The BJP is currently in power in Assam, while the Mizo National Front (MNF), a constituent of the BJP-led North East Democratic Alliance (NEDA), is ruling in Mizoram.
Both the Chief Ministers had attended a meeting of all Chief Ministers of Northeastern states, chaired by the Union Home Minister, in Shillong on Saturday.
In his statement, the Mizoram Home Minister said around 200 personnel of the Assam Police led by an IGP and accompanied by the DC, SP and DFO, Cachar, came to Vairengte auto-rickshaw stand at around 11.30 a.m., on Monday and allegedly forcibly crossed the duty post manned by the CRPF personnel stationed there and over-ran a duty post manned by one section of Mizoram Police personnel.
The Assam Police also damaged several vehicles that were travelling along the National Highway between Vairengte and Lailapur, he claimed.
Upon learning of “the arson committed” by the Assam Police, residents of Vairengte town proceeded to the site to inquire and these unarmed civilians were assaulted by the Assam Police by lathi charging them and firing tear gas, thereby causing injuries to several civilians, the Mizoram Home Minister said.
He said the Superintendent of Kolasib and an Executive Magistrate went to meet them and try to resolve the issue. However, “the Assam side was adamant and unwilling to discuss the issue”, he alleged.

Lalchamliana said the confrontation continued and a volley of tear gas canisters and grenades were launched at Mizoram Police followed by firing from the Assam side at around 4.50 p.m.
The Mizoram Police responded spontaneously by firing back at Assam Police in spite of the fact that the SP was still inside CRPF duty camp negotiating with the Assam Police authorities, he said.
Mizoram was part of Assam until 1972, when it was carved out as a Union Territory.
Mizoram became the 23rd State of India on February 20, 1987 following the Mizoram Accord between the erstwhile underground Mizo National Front (MNF) and the Centre, which ended 20 years of insurgency in the state.
The border dispute between the two neighbouring States is a long-standing issue. Several dialogues involving the Centre held since 1995 to resolve the dispute yielded little result.
While the Mizoram Government claimed that a 509-square-mile stretch of the inner-line reserve forest notified in 1875 under the Bengal Eastern Frontier Regulation of 1873 belongs to it, the Assam side agreed with the constitutional map and boundary drawn by the Survey of India in 1993.
After a massive tussle in 2018, the border row resurfaced in August last year and then in February this year.
However, the escalating tensions were successfully defused after a series of parleys with the intervention of the Centre.

On June 5, two abandoned houses along the Mizoram-Assam border were burnt down by unidentified persons, fuelling tension along the volatile inter-state border.
Nearly a month after this incident, a fresh border standoff cropped up last week with both trading charges of encroachment on each other lands.
While Mizoram accused Assam of encroaching upon its land and forcibly seized Aitlang area about 5 kms west of Vairengte village, the neighbouring State accused Mizoram of building structures and planting betel nut and banana saplings allegedly 10 kms inside Hailakandi district.
Two makeshift camps erected by Mizoram police on the disputed area were damaged by Assam police during a recent confrontation.
Officials of Assam’s Hailakhandi district administration have said razing of two camps constructed by Mizos and also a COVID-19 testing centre built by them was part of the efforts to foil Mizoram’s bid to capture its land on the border.
(PTI)