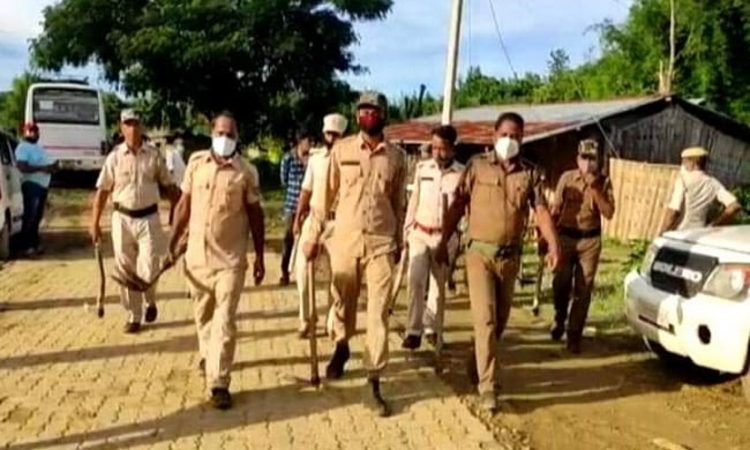 Silchar, July 30: The situation on the Assam-Mizoram border remained tense but calm as CRPF troops have started patrolling National Highway 306 between the two states, in strength.

Officials in Assam’s Barak valley said organized blockade on Assam’s roads leading to Mizoram had been lifted and no group was now out on the streets trying to stop truckers or other vehicles. After a clash on Monday between Assam and Mizoram police forces on a disputed border forest tract, various group’s in the Barak Valley had announced a blockade of Mizoram, drawing sharp protests from the neighbouring state.
However, palpable fear of entering an area which was like a war zone is holding back trucks Most truckers have stopped their vehicles in Dholai village near the border with Mizoram, said officials.
A long line of trucks parked on the highway now marks the entry point to Dholai’s bazaar. Land-locked Mizoram has been getting its supplies via Tripura during this week as tension and unrest held up its normal supply route through Assam.
Assam government had on Thursday issued an unprecedented travel advisory asking people not to travel to Mizoram and advised people from the state working or staying there to exercise utmost caution.
Despite an agreement Wednesday hammered by the Union home ministry to maintain calm on the border and to allow a neutral central police force to act as peace-keepers, the two states had traded charges about reinforcing police pickets and of not pulling back from the border on Thursday.
Tension along the border with Mizoram in Cachar and Hailakandi districts of Assam have been escalating since October 2020 with frequent incidents of burning of houses and encroachment of land.

The two states share a 164.6-km border between Assam’s Cachar, Hailakandi and Karimganj districts, and Mizoram’s Kolasib, Mamit and Aizawl.
Both states have differing interpretations of their territorial border. While Mizoram believes that its border lies along an inner line’ drawn up in 1875 to protect tribals from outside influence, Assam goes by a district demarcation done in the 1930s. (PTI)